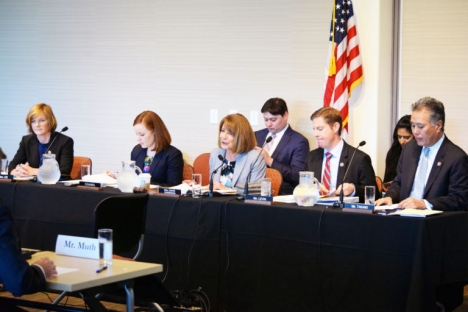 April 25, 2019 (El Cajon) - Four Democratic members of Congress agreed Wednesday that the Trump Administration – particularly the Departments of Education and Veterans Affairs – must do more to protect veterans from the predatory practices of some for-profit colleges and technical schools.

A hearing co-chaired by U.S. Reps. Susan Davis and Mike Levin, both back in San Diego County for the Passover holiday, was also attended on the Grossmont College campus by U.S. Reps. Mark Takano of Riverside, California, and Susie Lee of Las Vegas, Nevada.  Four witnesses testified in the one-hour 45 minute hearing, including Robert Muth, academic director of the Veterans Legal Clinic at the University of San Diego Law School; Robert Shireman, a senior fellow at the Century Foundation; Chancellor Eloy Ortiz Oakley, whose office supervises the 115 community colleges in California; and Kristyl Rodriguez, a Marine Corps veteran who now studies cosmetology at the Belles Academy in Poway.

Davis, a San Diegan who chairs the Higher Education and Workforce Subcommittee of the House Committee on Education and Labor, set the tone of the meeting when she said that unscrupulous for-profit colleges consider veterans just leaving the service to be “dollar signs in uniform.”  She said they often use high-pressure tactics to enroll the veterans in their institutions, lying to them about job placements in industry, or transfer credits to four-year colleges, and then deliver substandard education ineligible for transfer credits.  Additionally, some go out of business, leaving veterans who have taken out loans to finance their education without any way to recoup their investment or pay them back.

Davis said the federal government has failed in its “responsibility to protect those who protect us.”

Levin chairs the Subcommittee on Economic Opportunity of the House Education and Labor Committee, and his district includes northern San Diego County and southern Orange County.  He noted that this region is home to several hundred thousand veterans.  Many of them receive “just a piece of paper” when they get degrees from unscrupulous for-profit institutions, with no real prospect for jobs or advancement in higher education.  The bad actors among the for-profit institutions, he added, make false promises to students in an all-out effort to persuade the veterans to enroll, and thereby trigger the for-profit colleges’ eligibility for additional federal funding.

Currently, he said, for-profit colleges are eligible to receive federal funding if they can show that at least 10 percent of their funds do not come from federal subsidies.  Even though the GI Bill and other veterans benefits are funded by the federal government, such funds count toward the 10 percent threshold.  Therefore by enlisting veterans in their colleges, the for-profit institutions open the flood gates for other taxpayer-funded federal subsidies.

Takano, a former teacher who now chairs the House Committee on Veterans Affairs, said that the single greatest threat to the U.S. all-volunteer American force is when people no longer want to enlist.  Scandalous mistreatment of student veterans, who are left stranded by school closures and unreasonable educational debt, can have the effect of eroding Americans’ confidence in the military, he said. He called for the 90-10 loophole to be closed.

Lee, who founded Inner-City Games to enhance after school programs for public school students in Nevada,  did not make an opening statement but participated in the questioning of the witnesses, who mostly provided corroboration to the committee members’ contention that some for-profit colleges and institutions are taking brutal advantage of the student veterans, and that the Trump administration must do more to protect them. 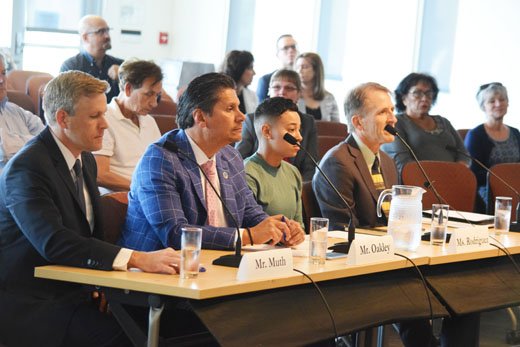 One for-profit institution in San Diego County—Belles Academy in Poway, which teaches cosmetology—was praised by student Krystyl Rodriguez, who said the school has a good reputation among salons and barber shops and trains its students thoroughly to take places in the cosmetology industry.  On the other hand, Rodriguez said she believed that the nation’s military services and the Veteran’s Administration need to do more to help members of the military transition to civilian life, including better counseling for students about options for their post-military educations.

Muth, a former Marine corps captain, told the committee that veterans often are “lied to about everything that they can be lied to about” including credits, costs, and jobs thereafter.  He said that there have been instances when for-profit colleges continue to bill veterans’ accounts, even when the veterans are no longer enrolled in the program.  When unscrupulous colleges go out of business, the Veterans Administration requires the veterans, rather than the school, to reimburse the expenses.  In some instances veterans spend as much as $100,000 to pursue worthless degrees, he said.

Closures of for-profit schools recently have left 22,000 veterans in the lurch, he testified.

Oakley, who had served in the 82nd Airborne Division before pursuing his higher education, said throughout California’s community college system, there are veteran resource centers which have been established to not only help the veterans academically, but also to help them psychologically and socially.  For-profit schools often lack any such facilities,  Oakley said.

He urged Congress to “provide meaningful oversight and accountability” standards for the for-profit colleges.  He noted that community colleges are governed by elected boards and face additional supervision from the state government.  No such accountability exists for for-profit schools.  Even the boards which allegedly accredit them are made up of the owners of the for-profit institutions, rather than independent overseers.

Shireman, who had served in Barack Obama’s administration as a deputy undersecretary of education, said that whereas community colleges spend a tiny fraction of their budgets on marketing, some for-profit institutions easily spend 35 to 40 percent of their budgets on marketing – even more than they spend on their academic programs.  He said that students who feel cheated soon find that when they signed dense paperwork admitting them to the school, they waived their right to sue the institutions, but must instead submit to arbitration.  He said students also are forbidden from bringing their complaint in concert with other students – all in an effort to prevent regulators from learning about abuses.  He recommended that Congress outlaw such forced arbitration clauses.

In answer to a question from Congresswoman Lee about how Congress can prevent for-profit colleges from regulating themselves, Shireman suggested that they be required to have potential employers sit on their boards, which he suggested could result in “a powerful change.” Owners of for-profit institutions should be able to provide input to accreditation boards, but should not be able to sit on them, he said. 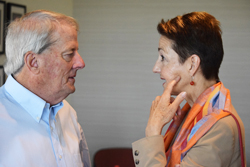 Following the meeting, Bernie Rhinerson, a trustee of the San Diego Community College Board, commented that the hearing “brought out many of the challenges that veterans face when they get out and try to get an education and … are subject to predatory practices.”  He added that the San Diego Community Colleges had to deal with that “with the closure of Corinthian and ITT Tech where we had literally hundred of veteran students whose credits did not transfer and who were left out in the cold.”

Committee Counsel Claire Viall said that there will be several more hearings on the issue around the country before a bipartisan bill is marked up and debated in the Education and Workforce Committee and eventually sent to the floor of the House of Representatives.