By Henri Migala
July 25, 2020 (La Mesa) -- Police and "counter-protesters" outnumbered a small number of would-be protesters around the La Mesa Police Station today during an event of questionable origin and intent.

The event was promoted with a social media post that ominously had a photo of Chase Bank burning down May 30th in La Mesa.  The post touted the event “in solidarity with Portland” and  called for “Justice for Amaurie Johnson and Leslie Furcron.” Furcron was seriously injured by a beanbag fired by an LMPD officer after she threw an object at police on May 30. Johnson was charged with assaulting an LMPD officer after a controversial stop near a trolley station but charges were dropped after body cam footage failed to substantiate the officer’s claim.

Those who turned out at the police station late today voiced puzzlement over where the flyer came from. No one seemed to know who created or distributed it.
ECM’s editor spoke with a local merchant earlier in the day and an individual affiliated with a La Mesa Civil Defense group. They indicated that a group of local residents planned to be on hand to defend downtown businesses against looters.
Another media outlet reported that “East County Defenders,” a group most closely associated with Santee, turned out in La Mesa this evening. It is unclear whether those who turned out this evening were with one or both of those groups. Apparent “defenders” were spotted in front of the La Mesa Springs shopping center,  as well as at the police station, a downtown resident told ECM via a phone call tonight.

The East County Defense site on Facebook posted a photo showing a large group in patriotic garb rallying in front of the La Mesa Police Station earlier in the day. (Photo, right)
As with most previous protest events, all or nearly all of the racial justice protesters wore masks, while nearly everyone with the much larger counter-protest group, many wearing pro-Trump shirts or hats, were not wearing a mask.
The protest failed to materialize after some would-be protesters voiced concerns over a “set-up.” The handful of racial justice advocates present, who were mostly white, quickly disbanded.
A young male protester wearing a hat, dark glasses and a mask, and who was reluctant to share his name, said, “One of the white supremacists yelled out her truck that they were going to run us over.”
One of the young men who was with the Black Lives Matter group said, “We’re starting to see more events called for by anonymous sources with the intent to start trouble, but we’re a lot more experienced now.”
Police blocked off the various roadways leading into the La Mesa Police Station with police cruisers with flashing lights. Officers were present and visible around the station.  Two large, white vans drove into the station around 6:00 pm. The police were noticeably more relaxed than during previous demonstrations around the station. LMPD also sent out several tweets to assure the public that only 12-20 protesters had shown up and the situation remained calm.
The La Mesa Police Station was the site of a much larger protest on May 30th over George Floyd and racial justice issues, including the Amaurie Johnson stop involving La Mesa Police. Following a march that drew thousands, that night dissolved into violence between several hundred demonstrators pitted against police officers. Protesters at that event hurled rocks and bottles at police, documented on multiple videos and hurled bottles filled with explosive material at the police station.  Many rounds of  ‘less lethal’ projectiles were fired at the protesters by the police, including tear gas, pepper balls, and beanbags. The night of May 30-31, dozens of businesses were looted or vandalized. City Hall was set on fire, along with several vehicles. Two banks and a historic building were burned to the ground.
The La Mesa Police Station has also been the site of several other Black Lives Matter events, including one supported by dozens of labor unions and another supported by numerous motorcycle clubs from throughout Southern California. Those events stayed peaceful.
There is another demonstration scheduled to be held at the La Mesa Police Station on Saturday, August 1, in support of demands for justice in the deaths of Vanessa Guillen, and Breonna Taylor.  Vanessa Guillen was a 20-year old Army soldier who is believed to have been killed inside Fort Hood, TX, by another enlisted Army soldier. Breonna Taylor was a 26-year old emergency medical technician who was shot 8 times by plain-clothes police officers who had entered her home with a ‘no-knock’ warrant. 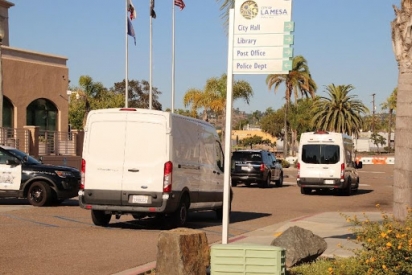 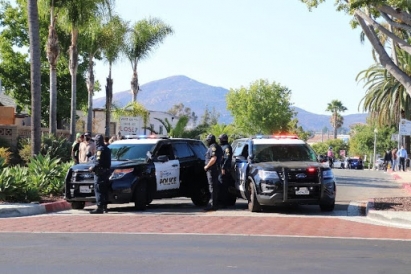 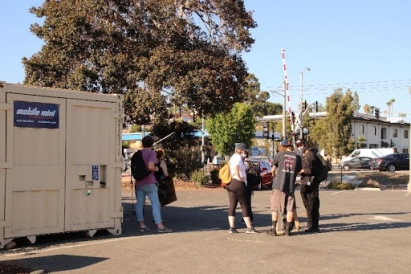