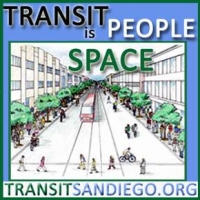 September 11, 2014 (San Diego) – Cleveland National Forest Foundation is urging the public to join in a protest Friday over the transportation plan put forward by the San Diego Association of Governments (SANDAG). The protest rally will be held in front ot the Wells Fargo building in downtown San Diego, 5th and B Street on Friday, September 12 from 11:30 a.,m. to 12:30 p.m. A press release issued by CNFF.org and TransitSanDiego.org states:

For the past two years, SANDAG has repeatedly heard at public meetings a call for a change in their course.  Our region needs to give transit development higher priority and stop expanding freeways.  It was no different Friday.  Prior to the motion passing, 15 representatives of various organizations, speaking on behalf of thousands of San Diegans, advocated for SANDAG to pursue a third alternative which would put transit first, an alternative which would address Transportation Justice, economic and health issues currently exacerbated by SANDAG’s cars-first priorities.  Many wanted SANDAG to at least consider CNFF’s 50-10 Transit Plan.  Unfortunately, the discussion of the committee members and their Executive Director centered on how they did not have enough funding for more transit development and that they needed to move on with the process or freeway funding would be jeopardized.  They claimed that they had a “balanced” approach.  This is the same message they have been giving the public to justify the two previous Regional Transportation Plans.

Even though they have had years to work on new RTP, they have not offered an alternative which would change budget allocations even though they have the ability to do so.  The next RTP is appearing to be like previous ones, without any significant improvements to reducing green house gas emissions or air pollution.  It will not provide tangible economic benefits to neighborhoods or small businesses and again denies our communities a functional, integrated transit system. If passed as proposed, mode shares for pedestrians, bikers, and transit users would not change much in the next ten years. It will only have the typical feel good grants for a handful of “smart growth”, environmental mitigation and bike path projects.  Given this kind of approach and the decades of 8 to 1 funding in favor of highway development, auto-centric communities will continue to dominate for our children, grandchildren and beyond.  It is not at all balanced.

SANDAG’s next RTP should not be called San Diego Forward.  It is BACKWARDS!  Help us send this message to the people of our region by attending a rally in front of the Well Fargo building, 5th and B St., this Friday, Sept. 12 from 11:30 AM to 12:30 PM. Bring a friend or two.  If you cannot attend, try to have someone else attend in your place.

Let’s send a message that we want Transportation Justice.  We want Transit First.  We need the 50-10 Transit Plan implemented. A plan which is fundable by simply reallocating existing funds which SANDAG controls.

Thanks for your support and advocacy,

I wouldn't want to change the allocation of funds from what the voters approved in 2004. Here is the text from the actual ballot measure: 6. Require revenues be used to fund specific projects and programs. The revenues will be allocated among highway, transit, and local street and road improvement projects. Please note the latter.
"Transportation justice"??