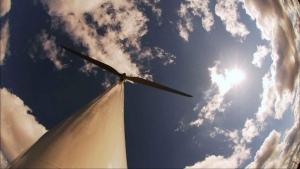 May 14, 2012 (La Jolla) -- A coalition of environmentalists, tribes, and residents opposed to the Ocotillo Express industrial wind facility will hold a news conference Tuesday, May 15 at 2 p.m. in front of the La Jolla offices of developer Pattern Energy (4225 Executive Square, La Jolla) to explain to the public why they cannot accept Interior Secretary Ken Salazar's decision to approve the project--and why they will continue their opposition.

Although the project was approved by the Imperial County Supervisors on April 25, Pattern Energy, which seeks to put 112 giant wind turbines on three sides of the desert community of Ocotillo, had to wait for the Secretary of the Interior, Ken Salazar, to sign the Record of Decision (ROD).  The ROD was issued on Friday, May 11, approving the project.

"It came as a devastating blow to many who live in and love the desert and the history it contains. It seems Mr. Salazar doesn’t understand or doesn’t care that this project will cause irreparable harm to sensitive desert habitat and destroy land and view sheds which are sacred to Native Americans as well as destroying the quality of life for local residents," a press release issued by the coalition states.

The text of the Record of Decision recognizes that “. . .  many tribes attach religious and cultural significance to the project site and the broader landscape, and it also recognizes that the project being approved will adversely affect those resources.”(Record of Decision p.24) However, it rationalizes that there are other considerations and that the need to produce renewable energy is the justification for disregarding the heritage of the Native Americans, as well as the health and safety of residents and the scenic and recreational value of previously protected public lands.

"It ignores the fact that during the review process many letters and speakers pointed out that there are practical ways to achieve that goal without destroying the desert. The mitigation measures to protect the historical and cultural resources are woefully inadequate; the wisest thing to do will be not to disturb them," opponents' press release states.

Until the ROD was issued, the area where the turbines will be built was classified by the U.S. Bureau of Land Management (BLM) as a limited use area, due to the presence of cultural resources as well as sensitive plant and animal species. Motorized vehicles could only travel on designated roads and it was forbidden to move rocks around.

With the stroke of a pen, the area can now be bulldozed to dig foundations 25 to 35 feet deep and 70 to 80 feet in diameter to  accommodate 112 wind turbines over 440 feet tall as well as 42 miles of new roads.

Those speaking and answering questions at the press conference Tuesday will include members of the Quechan and Viejas tribes, Ocotillo and other Imperial County residents and members of  environmental organizations such as the Desert Protective Council and the Anza Borrego Foundation.

Curiously, the final project approval document says the project will produce power for only 25,000 homes -- even though Pattern claimed it would power 130,000 homes when it touted project benefits to win support from Imperial County's Supervisors and Planning Commission. No explanation for the reduction of 105,000 homes has been offered, raising a question of whether the project is viable and why taxpayer dollars in subsidies were approved for the already controversial project.

There will also be an earlier news conference on the same day in El Centro (at 9 a.m. on the west side of the Imperial County Courthouse located at Main and 11th Street.)

Ken Salazar in nothing more than a political shill or Charlie McCarthy for the investors behind this industry. It is not in the job description, but was he put in this position specifically for this purpose. He has been making personal appearances on behalf of this industry for quite some time. Especially when there is controversy. For his part, the big payday will come after he leaves office.