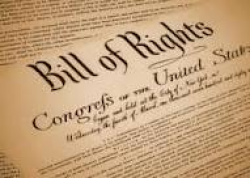 Protesters aim to convince President Barack Obama to veto the National Defense Authorization Bill, which contains “heinous provisions for indefinite and unexplained military arrest of American citizens on America soil,” a press release from the group states. The President recently rescinded his pledge to veto the measure pushed forward by the Republican-controlled House. The bill currently awaits the President's signature.

The act would empower the President to authorize the various armed services to seize and jail, endlessly and without charge or jury trial, any citizen he considers a threat to national security.

Monday’s demonstration at the headquarters of the San Diego County Democratic Party, 8340 Clairemont Mesa Boulevard, is scheduled to begin at 11 a.m. and is being sponsored by members of the local council of San Diego MoveOn, and of the local chapters of Progressive Democrats and Democrats for America.

“This is a stealth attempt by Republicans and centrist Democrats to bring a war on terror down onto the homes of America, ” said Frank Gormlie, who chairs the local council of MoveOn. “It represents nothing less than civil war against dissent, a destruction of the Bill of Rights, and is a mechanism previously limited to totalitarian governments of the 20th Century,” Gormlie said.

Another MoveOn council member pointed out that Congressional supporters of the disembowelment of the Fourth Amendment search and seizure provision are “leaving conscientious people with no alternative but to do the thing the bill threatens, dissent.”

The bill was initially opposed by California Sen. Diane Feinstein, but many Democratic Party Representatives in the House and Senate - including her and Senator Barbara Boxer - approved sending the bill with its suspension of habeas corpus rights to the White House, including many who are considered liberals, such as Representative Susan Davis.

Though the American Civil Liberties Union and other national organizations in the past week have sent out internet and postal mailed alarms about the poison provisions in the bill, President Obama’s flip flop on his position against the domestic arrest provision has essentially escaped the notice of the mainstream media.

"There has not been any substantial national discussion on such heavy changes to our basic rights," Gormlie said. “What you get instead are exhortations to us to get out and shop so that we can save the economy."

Gormlie continued:“No one cares to point out that this is a national crisis of our civil liberties, an end to the posse comitas laws, and at the time when the Occupy Wall Street movements have challenged the establishment, this bill would allow our troops to sweep up dissenters in public parks across the country, by calling them 'suspected terrorists' - like occupy protesters were called in London recently."

A woman who was a recent member of the local Move On Council pointed out that the Department of Homeland Security has already resorted to tactics aimed at intimidating peace advocates, saying that she knows people who received ominous Homeland Security letters when they sent medical supplies to Iraqi citizens. “If this bill passes, these people could be arrested for ‘aiding terrorists.’”