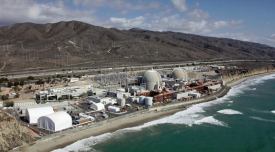 Update March 12:  View a video of the rally www.youtube.com/watch

March 9, 2012 (SAN ONOFRE) – Activists from San Diego to Eureka will converge at the San Onofre Nuclear Generating Station (SONGS,) just south of San Clemente, on the first anniversary of the devastating Fukushima disaster, March 11, 2012. The peaceful protest will occur a short walk from San Onofre State Beach about 1/8 mile south of the SONGS facility.

The objective of the event is both to commemorate the ongoing disaster at the Fukushima Daiichi Power plant that started one year ago -- with three reactors still in full “level 7” meltdown -- and to push for closure of the San Onofre plant.

The program will include two honorable guests from Japan:  Kyoko Sugasawa of Sendai City near Fukushima, where the tsunami struck, and  Hirohide Sakuma, who was born in Fukushima. These speakers will address the assembly using an interpreter.

In the devastation of earthquakes, people rushed to my deli to get their

Sakuma said, “My mind is constantly debating whether we should evacuate from Sendai.”

Motion Picture Actress and Progressive Democrats of America Chair Mimi Kennedy, who appeared in Oscar-winning production “Midnight in Paris,” will address the crowd. “I am happy to take part in such a worthy cause,” Ms. Kennedy said. “The risks and costs of nuclear energy are just too high, and many other alternatives are now available.” 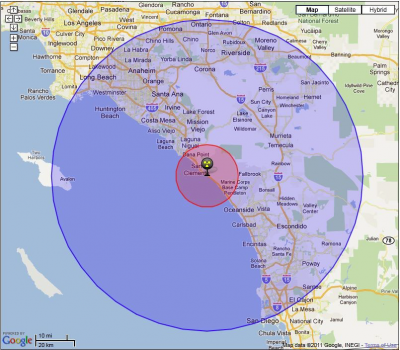 Events are planned throughout the U.S. on March 11 to commemorate the Fukushima disaster and to bring to light risks at many of the 65 power plants and the 104 nuclear reactors in the U.S., and to stand in solidarity with the San Onofre event.

“The similarity between Fukushima and San Onofre is stunning,” said Raymond Lutz, former congressional candidate, engineer and National Coordinator of Citizens' Oversight Projects. “The two plants are not identical, but San Onofre -- originally built to withstand only a magnitude 6.0 earthquake -- was retrofitted to withstand only a 7.0 earthquake. The seawall at San Onofre is only 14 feet tall from high tide (30 feet from low-low tide). But the real danger is stark: the Japanese earthquake was a magnitude 9.0 and tsunamis peaked at 133 feet.”

Should a meltdown occur at San Onofre, the results would be devastating for the entire county, Lutz said, noting that such a crisis would likely “force evacuation of millions of people, and lead to many untimely deaths. We can't let that happen.”

Despite the earthquake, tsunami, and terrorist risks, the undoing of the San Onofre plant maybe due to internal problems. After spending $640 million to replace the steam generators just 18 months ago, operators thought the plant would run for another 10 to 20 years. Instead, hundreds of heat transfer tubes are exhibiting untimely thinning, baffling experts. The public only found out about the thinning tubes after the unexpected radioactive steam release last month forced management to explain why the entire plant was shut down.

“At some point, the San Onofre plant must be decommissioned. We believe that time is now,” said Gene Stone, of Residents Organized for a Safe Environment in San Clemente. “While the plant is shut down for maintenance, we believe this is the right time to start the decommissioning process for the safety of the workers at the plant and the community at large. We must do the right thing now and not put the California economy at risk. Let's not spend one dime more on any more retrofits."

Problems at the plant are not all technical in nature. Workers know they will lose their job if they blow the whistle to the public about any safety concerns. This culture of fear at the plant does not improve safety, and to top it off, there is no labor contract with nuclear engineers who have the responsibility to operate the plant safely.

Supporters of plant shutdown say power companies like Edison and Sempra Energy should actually guarantee workers jobs just to make sure workers won't continue operating a plant like San Onofre that should be shut down for safety reasons.

Although management says workers will be left jobless if the plant is decommissioned, just the opposite is more likely the case. Many people will continue to be employed for decades during decommissioning, and studies show that the renewable energy sector provides five times more jobs than traditional fossil fuel or nuclear energy plants.

Many people support nuclear energy as a viable carbon-free alternative to fossil fuels. “We hear all the time that nuclear plants are 'carbon neutral', but just the opposite is the case when you consider the entire fuel cycle, which also has severe impacts to the environment during mining, purification and disposal," Lutz said. "Disposal is perhaps the most problematic with no clear solution at hand and spent nuclear fuel piling up at nuclear plants across the country. The fact that we continue to operate these plants with the knowledge that they can devastate the area, kill many thousands of people, contaminate the soil, ocean and air is quite remarkable.”

Each nuclear plant has to be paired with a large fossil-fuel plant to provide power when the plants are shut down for frequent maintenance. The net result is a solution that is far from carbon-free.

Event promoters say that the U.S.should follow the example of Germany and work to decommission all nuclear energy plants nationwide and move immediately to renewable energy sources.