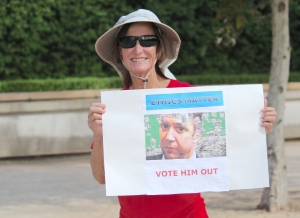 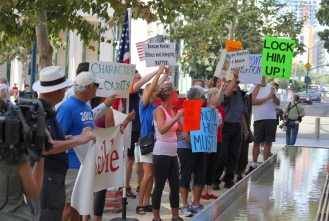 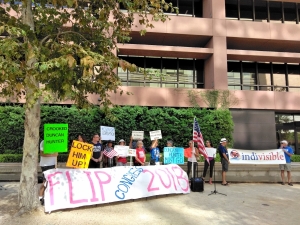 The arraignment was scheduled for 9:30 a.m. on August 23. Rep. Hunter descended from a black SUV around 9:45 a.m. and wasimmediately surrounded by reporters and chanting protesters. Attorney Greg Vega led Rep. Hunter inside the courtroom, where the Republican Congressman waited in the hallway for his turn in front of Judge William V. Gallo. After 10:15 a.m., Margaret Hunter, the Congressman’s wife, also indicted, entered the courthouse using a different door and attended the hearings without having any contact with her husband. Mrs. Hunter had her own attorney and sat a few chairs away from her spouse.

They both pled not guilty.  After Rep. Hunter’s attorney claimed the couple lives paycheck to paycheck, Judge Gallo set the bail to $15,000 for Rep. Hunter and at $10,000 for hi 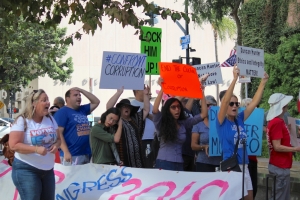 Outside the courtroom, a couple of dozen local residents gathered to protest Rep. Hunter’s alleged crimes and ask for his resignation. The protest was organized by Indivisible San Diego.

Benjamin Martinez, a San Diego resident, said, “Yesterday, I became an United States citizen, I took the oath and what makes this country great is our First Amendment right to be here, to film and to bring awareness.“ He then placed a head band with pink bunny ears on his head, e 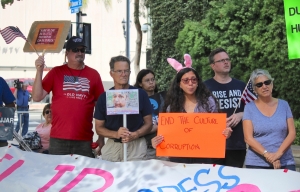 xplaining: “The gentleman (Rep. Hunter) spent money to fly a pet bunny from California all the way to Washington. The callousness of that is absolutely insane. That’s why I wear the bunny ears and the fact that I don’t have any hair.” Martinez said he is content to wait for the court’s decision. 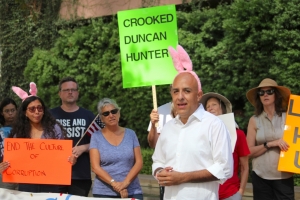 Local resident Carol Landale was holding a Photoshopped picture of Hunter being rained on by paper dollars under a bold headline claiming “Ethics matter.” There was also a call to action in red capital letters urging people to “Vote him out.”

“I am here because Duncan Hunter is a crook and we need to get crooks out of office,” said Landale, who was representing the San Diego group for Gun Violence Prevention and criticizes Hunter of accepting money from the NRA.

Thomas Becker, another San Diegan, said, “I am here because in my opinion Duncan Hunter is a criminal and should immediately resign.”

Alan Geraci, a constituent in the 50th Congressional District and a candidate for the 75th Assembly District, decided to show his support for “the justice system. We want to hear a full explanation to why he believes he’s not guilty,” Geraci said about Hunter, adding: “I believe he should resign. That would be the honorable thing to do.”

Ammar Campa-Najjar, Rep. Hunter’s political rival, came to the courthouse later in the day and addressed the media. Campa-Najjar is running for Congress in CA’s 50th district against Hunter in November and told the press he doesn’t think 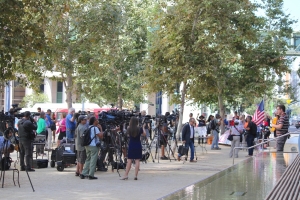 Hunter is going to resign because he “ obviously has a track record of not making wise decisions.”

Rep. Hunter left the courthouse after a few hours, separately from his wife, and didn’t offer a statement to the crowd of over 60 journalists stationed outside. Hunter’s attorney, Greg Vega, told the press, “We are hoping the public will keep an open mind until we will have an opportunity to respond in a court of law, not the court of public opinion.”

After the arraignment, Rep. Hunter has been removed from all of the House committees that he served on in Congress.

On Monday, according to a recent SurveyUSAElection Poll conducted for KGTV-TV and the Union-Tribune, “Hunter leads Democrat Ammar Campa-Najjar by 7 points among those who are aware of the criminal investigation” and also among “those who say they are unaware of the criminal investigation.”  The same survey shows, “In CA-50, Republicans stick by GOP's Duncan Hunter, see indictment as politically motivated, would prefer any other
Republican to Hunter, but will vote for Hunter if he decides to continue push for re-election rather than Democrat.”

Margaret and Duncan Hunter are expected back in court on September 4, at 9:00 a.m. for the next hearings.

DUNCAN HUNTER on FAMILY VALUES - As a husband and father of three, I strongly believe in preserving family values and protecting the life of our most innocent.

He admitted on camera that the money was paid back so therefore he did nothing wrong. Sounds like an admission of sorts to me, or perhaps a Donald Trump style quote (after all, he is a huge fan). No matter if the money was returned somehow, a crime was still committed. And where did he get such a large amount of money to re-pay the pilfered campaign account anyway? He claims he's poor, and barely getting by. "Living from paycheck to paycheck". This is going to be interesting.