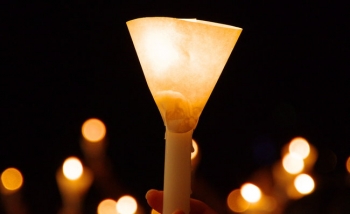 August 7, 2019 (Pasadena) - Thousands of Californians joined protests across the state to take a stand against white supremacy after the mass shooting in El Paso.

Last weekend, a gunman killed 22 people at a Walmart store in that border city, shortly after posting a racist, anti-Latino essay online.

More than 50 communities nationwide held vigils Wednesday night, including eight in the Golden State - in Claremont, Oakland, Pasadena, Pomona, Riverside, San Francisco, Santa Barbara and Sierra Madre.
Salvador Sarmiento, campaign director for the National Day Laborers Organizing Network, says the massacre won't keep the immigrant community quiet.
"It's really a first step in a call to action to really expose that hateful world view," he states. "Part of the challenge is not letting that hateful worldview create the fear that it wants to create in our hearts."
The day of action was dubbed El Paso Firme, meaning El Paso Strong.
In his online posting, the gunman in that incident referenced a white nationalist theory known as "the great replacement." It bemoans the changing demographics that will end the white majority in the U.S. in the coming decades.
President Donald Trump spoke of unity on Wednesday as he visited El Paso and Dayton, Ohio, the site of a second mass killing.
The demonstrators want to see gun control measures, including universal background checks and a ban on assault weapons, coupled with a commitment by political leaders to fight domestic terrorism. They also criticized Trump for referring to asylum seekers as an invasion.
"It was foreseeable that the hate-filled speeches, the hate-filled rallies, you know - mixed with uncontrolled access to weapons of war - this kind of violence, sadly, is predictable," Sarmiento says.
The events were organized by a coalition that includes the Border Network for Human Rights, the Refugee and Immigrant Center for Education and Legal Services, the National Day Laborer Organizing Network, the Reform Immigration for Texas Alliance, Repairers of the Breach, and the Poor People's Campaign.