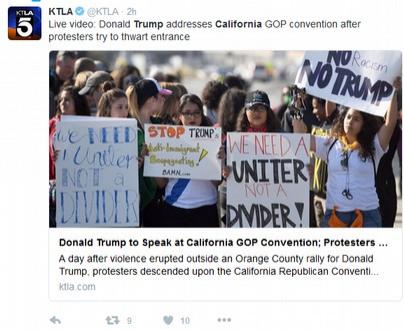 April 29, 2016 (San Diego) – Republican presidential front-runner Donald Trump was forced to cross a barricade and walk into the Republican National Convention hall in the Bay area, California today amid heavy Secret Service protection after hundreds of protesters blocked the street, preventing his motorcade from reaching the Hyatt Regency hotel.

Some held signs say Trump would “make America racist again,” a take-off on his campaign slogan to “make America great again.” Others carried Mexican flags to protest Trump’s anti-immigrant statements and stances, including his aim to build a wall along the entire U.S.-Mexico border and deport undocumented immigrants.

“That was not the easiest entrance I’ve ever made,” Trump told convention attendees in Burlingame. “My wife called; she said, ‘There are helicopters following you.’ Then we went under a fence…oh boy, felt like I was crossing the border, actually.”

Yesterday, an anti-Trump rally at Costa Mesa in Orange County turned violent, with several police cars damaged by rocks thrown, though no injuries were reported.  Twenty protesters were arrested.