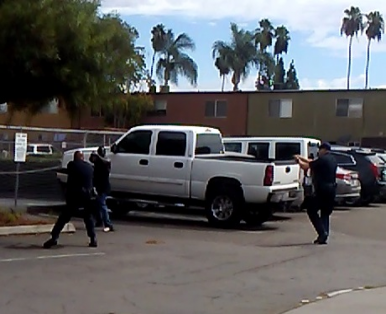 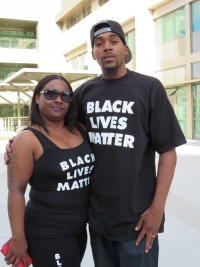 “The country’s eyes are on this city now,” Rev. Shane Harris with the National Action Network said. “We’ve got to expose the in 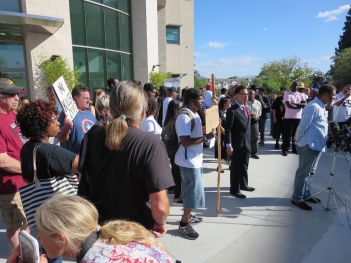 justice in this country and this city.”  Rev. Harris called for a federal investigation by the Justice Department and indicated civil rights lawyers are meeting with the family today.  He also faulted El Cajon for not yet having body cameras on police officers or in vehicles. He claimed one of the officers has a “history” but did not elaborate.

Police have indicated both officers are 20-year veterans of the force and per department policy after a shooting, have been placed on administrative leave during the investigation.

According to police, officers responded to a 911 call indicating that Olanga was “not acting like himself”; he was found walking in traffic. His family has reportedly called before to report mental health issues.

Police indicate he did not comply with repeated instructions to remove his concealed hand from his pocket.According to police, next “the officer drew his firearm” and a second offer pointed a taser. Olango paced back and forth while officers talked to him but then “rapidly drew an object from his front pants pocket,placed both hands together and extended themrapidly toward the officer, takimg up what appeared to be a shooting stance.”

One officer shot Olango several times and the second officer discharged the taser.  Officers provided first aid at the scene and Olango was transported to a hospital,where he later died. 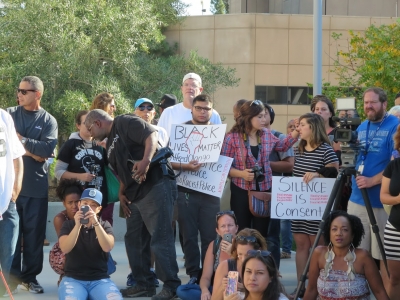 Olango did not have a gun; police have not disclosed what object he may have withdrawn from his pocket.

Civil rights activists and community leaders are calling for police to release cell phone video of the shooting, not just the still frame release. At least one witness has claimed Olango had his hands up at some point during the confrontation. Police claim the video confirms he did not, and indicate other videos are being examined (perhaps surveillance video,  if no other cell phones were taken.)

Questions have also been raised as to why no mental health specialist was dispatched with police since the 911 call indicated the subject was known to have mental health problems.

Posts on social media accused police of seizing cell phones from bystanders and witnesss,but a press release from the police states only one cell phone was taken, with permission of its owner, a worker at the restaurant at the parking lot where the shooting occurred.

Though tempers flared, the rally and march remained peaceful.

“We expect for this day of action to be one of peace and unity,”said Mark Arabo, a leader in El Cajon’s Chaldean community, in a press release joined by local African-American church leaders.. “Our thoughts and prayers go to the victim’s family…It is most important now that we remain calm and united.”  He urged people to be “mindful of the example that we continue to set for the nation”  but also called for an independent investigation.

The victim’s family fled violence in African and lived in a refugee camp before coming to America.  His death has triggered  fears among some in the community.

“My life could very well end, tomorrow,”said Mallory Wetz with the National Association for the Advancement of Colored People (NAACP).  “We see it every day.” She listed off names of other black men killed in controversial police shootings across the nation.  “I am very angry and I’m hurt.  I’m scared to walk the streets every single day…I could get shot or killed at any time.”