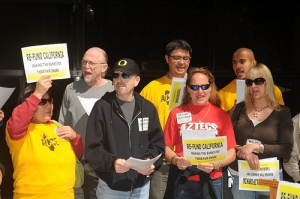 David Lagstein, an organizer of the “Hold Wall Street Accountable” rally in front of Bank America in downtown San Diego March 16, noted that there were similar events throughout the state.  "The people that came to our event were a mix of homeowners and members of coalition organizations. We are now doing district meetings with legislators in San Diego and throughout the state to try to push these bills through the community process,” he said, adding that larger actions are planned in April.

Organizations involved in the effort include the Alliance of Californians for Community Empowerment (ACCE) (representing low-income people, immigrants and workers), PICO, a network of faith-based groups seeking to bring voices of ordinary Califiornians into the policy arena, Service Employees Union International (SEIU), the Ramona Forum (a progressive community group) and the Home Defenders League (www.homedefendersleague.org) , a group battling the power of big banks and Wall Street.

A website about the campaign also includes a study that claims to document costs of foreclosures in California at www.refundcalifornia.org. According to the site, two million foreclosures are projected in California alone in 2012; Californians have lost $627 billion in savings in their homes amid a recession in which 1.2 million jobs have been lost and the state faces a $26 billion budget deficit. At the same time, banks have benefited from $789 billion in federal bail-outs—while $146 billion in bank bonuses and pay were made.

The coalition seeks legislation to require fair lending that would modify more loans to save more homes. According to the Center for Responsible Lending, banks and servicers often pursue a modification and foreclosure at the same time, commonly referred to as dual-tracking. But because it is difficult to stop the foreclosure process after it starts – even if a borrower qualifies for a loan modification – the homeowner can still lose the home.

Protest organizers also want legislation that would require a foreclosure fee be paid by foreclosing institutions; money raised would help pay back cities, counties, schools and the state for costs related to foreclosures. The coalition also calls for fair financing by halting “toxic interest rate swaps”, a move sponsors claim would save cities and states hundreds of millions in taxpayers’ dollars. 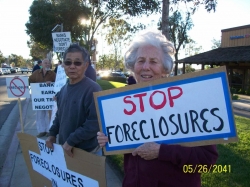 Dave Patterson is the organizer of the Ramona forum’s demonstrations last week outside Bank America in Ramona, where one in every 225 homes is facing foreclosure.  He plans an April 6 rally at 6 p.m. called "Protect America's Dream" at the Ramona Library, and will also host demonstrations each Friday at 4 p.m. in front of Bank America in Ramona. For information, see www.ramonaforum.org.

La Mesa Patch.com reports that a network of organizations irate about the number of foreclosures across the United States is urging Ramonans to take action. Members of Ramona Forum, HERSid and National Homeowners Cooperative plan to have Ramona protests be the kickoff for a nationwide campaign to put pressure on banks and the courts to halt the process of people being displaced from their homes.

Steve Campbell, who says he spent 30 years in the mortgage and real estate industries,co-founded of HERSid.com, a Ramona-based data mining company that gathers information relating to the "Broken Chain of Title" along with Charles Koppa, a Ramona Realtor. Campbell founded Protect American's Dream; both are also founders of National Homeowners Cooperatives. These groups state on their websites that they want to unite people concerned about foreclosure and provide resources to prevent homeowners' "financial ruin."

Asked by La Mesa Patch.com why Ramona protests would be the catalyst for a nationwide effort, Campbell said, "I feel that Ramona is indicative of the heart of America."

Patterson says his forum members are asking the public to call their state legislators and ask that three bills be passed: AB 935, SB 729, and AB 1321. Below are descriptions provided by the forum:

AB 935 (Blumenfield): This bill would impose a fee of $20,000 on a foreclosing party in order to mitigate the economic impact of foreclosures on cities, counties, schools districts and the state.

SB 729 (Leno/Steinberg): This bill would require loan servicers to give homeowners a yes or no decision on their loan modification application before beginning the foreclosure process. It also allows homeowners to bring legal action with specified remedies when serious violations occur.

AB 1321 (Wieckowski): This bill would mandate recording of all mortgage deeds/trusts and assignments, and payment of the requisite fees. It would also require that the mortgage note be filed prior to issuing a Notice of Default to ensure that the foreclosing party has the right to foreclose.

“I have provided copies of these legislative proposals to the managers of Chase and Bank of America, and asked them to ask upper management to publicly support the measures. Local banks contribute to the community, and we want the Wall Street banks to act like local banks,” said Patterson. “There are 60 Million MERS mortgages in our country where the title ownership is questionable. We need to demand a stop to this madness.”

All three bills were introduced in February and may be heard as early as this week in committee, according to Around the Capitol. No statements in opposition have yet been registered, however the measures could face stiff opposition from the banking industry.

New data reveals the high cost of foreclosures not only to communities, state and local governments, but to lenders themselves.

According the Joint Economic Committee of Congress, the average foreclosure costs $77,935--while preventing a foreclosure runs just $3,300.

On a typical foreclosure, the local government loses $19,227 through diminished taxes and fees as home prices fall. Homeowners and neighbors also take a loss in property values. But the biggest hit--$50,000-- is taken by the lender—far higher than the cost of preventing foreclosures.

While some of the figures may be inflated (falling property values are not due solely to foreclosures), Mortgage News Daily none-the-less concludes, “The cost of a foreclosure, it turns out, is pretty staggering and we wonder why lenders and the investors they represent aren't jumping at a solution, any solution, that would allow them to avoid going to foreclosure whenever possible.”

See the full report at http://www.mortgagenewsdaily.com/622008_Foreclosure_Costs.asp.

Protesters really did a great job in stopping Foreclosures. I really appreciate their work. Thanks for such an important post. It was really very helpful.
Tattoo Supplies