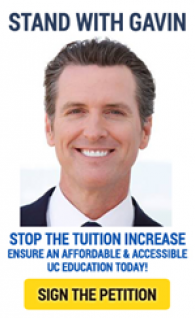 November 18, 2014 (San Diego)—Students staged sit-ins at all 10 University of California campuses statewide Tuesday to protest a new tuition hike that regents are expected to vote on this on Wednesday, November 19th.  If the 5% increase a year over the next five years is approved, tuitions will have tripled since 2005.

Already, the average student is graduating with $26,000 in debts—and many have not found jobs in today’s challenging economy.

The tuition hike is supported by UC President Janet Napolitano, who cites cuts in state funding to support the UC system as the primary reason why she believes tuitions need to rise.

But Lieutenant Governor Gavin Newson, who sits on the Board of Regents for the UC system, has denounced the proposed rate hike and has launched a petition to oppose it. You can sign the petition here: http://www.gavinnewsom.com/petition/stop-tuition-increases/

Newsom notes that UC chancellors have raised their salaries by 20%. He likens the billion-dollar entity demanding more taxpayer funding while increasing salaries for its top earners to the actions of big banks.

“There are savings to be found internally,” Newsom says. “Millions have been wasted on bureaucrat-driven failed IT projects, archaic administrative systems, and poorly conceived contracts.” He also calls for additional savings by partnering with California State Universities and community colleges, as well as re-evaluated the UC system’s definition of success.