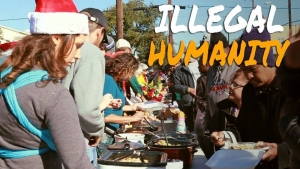 Update: Hear our interview with Dash McTavish from Food Not Bombs, a group planning to feed the homeless Nov. 25 in defiance of  El Cajon's ban.  Click the audio link to hear the interviewed originally aired on KNSJ.

November 12, 2017 (El Cajon) – Protest rallies on November 19th and 25th are being organized to oppose the El Cajon City Council’s unanimous decision to outlaw feeding the homeless and other city-owned properties, after previously banning camping in parks, sleeping on sidewalks and panhandling.  An online petition also calls on Mayor Bill Wells and the City Council to overturn the ban.

The first protest is scheduled for Sunday, Nov. 19 from 2 to 5 p.m. at Wells Park in the 1100 block of East Madison Avenue in El Cajon. San Diego Free Press reports that over 900 people have responded to the “Break the Ban” announcement of plans to defy the ban and feed the homeless.

“El Cajon's City Council voted 5-0 to ban feeding people who are homeless in El Cajon. It is now against the law. Please join us in a PEACEFUL act of defiance to this ban as we share food with people in Well's Park. When a law is immoral, it must be rejected. Please share this event across your networks and invite all of your friends.  This ban is a punitive measure under the guise of combatting the Hepatitis A outbreak. Hepatitis A is not spread by community and religious organizations feeding people, it is spread when the local government fails to provide adequate public bathrooms and hand-washing facilities for people. “

The Council justified the ban on church groups or others feeding the homeless in public spaces because of the countywide emergency hepatitis outbreak, which is believed to have started in El Cajon before sickening and hospitalizing hundreds of people, also causing approximately 20 deaths. The majority of the cases have been in homeless people and/or drug users.  The City and County have worked together to add public hand-washing stations, open more public restrooms overnight and offer vaccinations to at-risk individuals and those in contact with them.

Republican May Bill Wells has said that while he is concerned about over-regulation, “people are dying and the city has to protect the public,” the San Diego Union-Tribune has reported.

A less severe approach might have called on groups feeding the homeless to use appropriate sanitation measures and offering cleanup to eliminate or minimize risk.

Lane calls the ban on feeding the homeless “wrong, morally bankrupt.”  His statement goes on to suggest civil disobedience may occur if police attempt enforcement, though he adds that the event will be a “peaceful action.”  The group plans to have attorneys and legal observers present to document police interactions, he adds.

As of the last point-in-time count of homeless people conducted by the Regional Task Force on the Homeless in January, El Cajon had 388 homeless people, of whom 323 were unsheltered.  None had supportive housing, 46 had transitional housing and 19 were in an emergency shelter.

Belying the Mayor’s arguments that drug addiction is fueling homelessness in his city, the county also found that only 1% of unsheltered homeless in El Cajon admitted to substance abuse.

El Cajon also has a 24 percent poverty rate, one of the highest in San Diego County, and San Diego County has among the least affordable housing in the nation—and statewide, 70 percent of poor Californians now see the majority of their income going to pay rising rents, Voice of San Diego reported in August.  A key reason for homeless is quite simply the lack of affordable housing –a leveling factor that affects all low-income individuals, regardless of whether they suffer from addictions, mental health status, or are free of such complicating factors.

The second event to feed the homeless in defiance of El Cajon’s ban will be held Saturday, November 25th, also at Wells Park. That event is organized by Food Not Bombs San Diego. The group will be defying the ban and feeding the homeless. On their Facebook page, they are asking for donations of food, utensils, and a bail fund in case of arrests.

The protests have drawn support of some prominent Democrats including Lemon Grove Council Jennifer Mendoza and Supervisorial candidate Lori Saldaña. The El Cajon Council’s decision to outlaw public feeding of the homeless, however, was supporting by all four Republican Council members – Mayor Bill Wells, Councilmen Gary Kendrick, Steve Goble and Bob McClellan, as well as by Councilman Ben Kalasho, a Democrat.

The city has indicated its ordinance is only temporary until the county emergency public health declaration over Hepatitis A is ended. The ban does not apply to other public food sharing such as birthday parties or family reunions.

One church has responded to the ban by giving out gift cards to local restaurants instead of food,  KUSI reports. “Another effort to charge a penny for food also violates city law, which prevents sale of food in parks as well.

None of this is really designed to punish people,” Mayor Wells told KUSI, who encourages people to support organizations that help the homeless.

But one homeless woman told KUSI that she implores the City Council to change its mind and allow the feedings to continue.  She said, “I dare anybody to walk five miles, five days, five minutes in my shoes.”

That’s great advice as I’m sure you’ve lived on the street Homeless and walked in their shoes. You would also agree that the same advice applies to those that have mental disorders as well as those who are not addicted to drugs that are struggling to survive on the streets? Simple solution to a real problem. Thanks!

You aren't helping them By giving them money or food you are encouraging them to continue living off society, depending on others, living in unsanitary and unsafe conditions that could lead to disease and possibly death, so in a sense by "helping" them you are hurting them, If you do not give them money or food they will have to depend on government and non government programs designed to help them more than you can. If they want help it should be the right kind of help not easy access to drugs, alcohol and free food