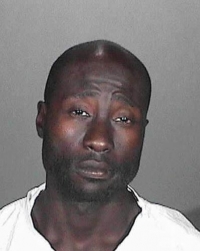 Manago has been charged with indecent exposure and burglary. He had previously been arrested for burglarizing a woman's home in Glendale while she was sleeping in 2012.  According to a Glendale News-Press article, Manago is a rap musician who goes by the rapper name Nem-Iz. Born in New Jersey, he has also lived in Raleigh, North Carolina and is the CEO of Writer's Blokk Media, an Indie music label.

For crime buffs out there, here are the bare facts of how police tracked down the prowler flasher suspect.

On June 21st, officers responded to a report of a hot prowl burglary and indecent exposure at a home in the 500 block of Tamarisk Way in El Cajon. One of the victims, a 30 year old woman, told officers she awoke to see a strange man standing over her and exposing himself in her bedroom. The victim was asleep in her bed with her 3-year-old daughter and husband prior to awaking. The victim said the suspect fled the house after she awoke and called police.

The victim's husband, who asked not to be named, told ECM that his wife is nine months pregnant.  "He put her at risk, he put the baby at risk, and he put our daughter at risk," he said.  "It blows my mind that something like this could happen."

His wife described the suspect as a tall skinny male of unknown race wearing a blue sweat shirt, jeans and a white baseball cap. The suspect left bodily fluid and a blue latex glove in the room of the victim. Officers searched the surrounding area but were unable to locate the suspect.

Officers and Communication Dispatchers began conducting follow-up. In reviewing calls over the previous days, they located reports of a possible prowler in the same geographic area,wearing similar clothing to the suspect in this incident.

Detectives conducting follow up were able to locate video surveillance provided by a neighbor which showed a man matching the description of the suspect from Tamarisk as he tried to break into a residence in the 500 block of Lindsey just hours before the Tamarisk break-in. The video also showed a possible vehicle associated with the suspect.

Further follow up revealed that on June 16th, officers had contacted a subject for suspicious activity after a 17 year old female had called to report he followed her and hid when she looked at him.  Officers identified him through records checks as Manago, a transient. A field interview form included his description and clothing. After determining no crime was committed, the officers gave the teen girl a courtesy ride home for her safety.

After additional follow up, Detectives determined they had probable cause to arrest Manago on June 22nd. He was sleeping in his vehicle, a black Toyota Camry, in the 6400 block of High Knoll Rd. in San Diego, which was similar to the vehicle in the video of the attempted burglary on Lindsey. At the time of his arrest, Manago was found to have in his possession a box of rubber gloves similar to those recovered at the scene of the Tamarisk burglary.

The victim's husband told East County Magazine that the prowler entered their home through an unlocked door in a neighborhood where until now, people felt safe keeping windows open on hot summer nights.  Now, he says, he's invested in "an alarm, a big dog, and we've got guns" for protection. The family is also making sure doors and windows are locked.

The suspect's rap biography on Jango describes a troubled childhood that included spending time with his mother in a homeless shelter and losing his father to death at an early age as well as his brother, who died of Sickle Cell anemia. According to another bio on Songcast, Nem Iz (aka Manago) later lost his mother due to HIV before having twins born prematurely. His infant daughter died, but he considers his son, who weighed just 1.8 pounds at birth, his "miracle baby."

This is an ongoing investigation with the possibility of additional criminal charges being filed. Anyone with information regarding this investigation is encouraged to contact the El Cajon Police Department at (619) 579-3311.