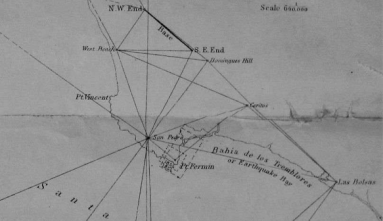 Photo: recently as 1881, the coastline from Northern Orange County to Central San Diego County was officially known as “Earthquake Bay.”

February 16, 2017 (San Diego) -- A public advocate and a geologist are singing a sour note over the  publicly funded  $64 Million study of earthquake risks at SONGS, the San Onofre Nuclear Generating Station.

The study, which appears to assert that the beach is a safe location for the construction of what will be the largest privately owned nuclear waste dump in the USA,  has the consumer group Public Watchdogs all shook up.

According to executive director, Charles Langley, "Ratepayers should be quaking in rage at the cost of this ridiculous $64 million study."

Robert Pope, the Public Watchdogs' Geologist says that in his opinion, the studies are "faulty." According to Pope "the study delivered an abundance of data, but the conclusions are faulty."

suggests that the authors may have had other conclusions that were redacted from the final report."

In addition to the "preferred conclusions," one of the reports mentions that it was edited by two "anonymous" individuals.

A copy of Public Watchdogs' response to the Edison report is available at www.publicwatchdogs.org