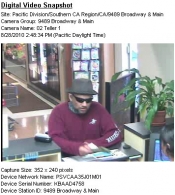 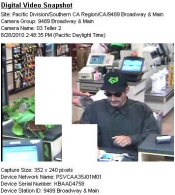 August 31, 2010 (El Cajon ) - The FBI and El Cajon Police Department seek the public’s help to identify two men who robbed a U.S. Bank branch inside Albertsons grocery store at 1608 Broadway, El Cajon, on Saturday, August 28 at 2:48 p.m. The two men simultaneously approached two tellers and threatened to shoot them if they did not comply with demands for money.

Both tellers complied with the robbers’ demands and provided money to each robber. The robbers then walked away. No weapon or vehicle was observed.

The robbers are described as follows: