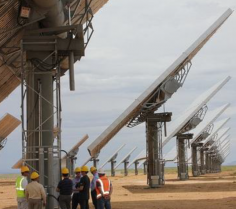 The Administration’s plan, as detailed in its Programmatic Environmental Impact Statement for Solar Energy Development in Six Southwestern States (PEIS), established solar energy zones on a little less than 300,000 acres, in Arizona, California, Colorado, Nevada, New Mexico and Utah, but the agency’s “preferred alternative,” selected by Salazar, is to keep 19 million acres of public land open to industrial solar applications. The Secretary signed off on the plan on October 12, 2012.

"The public lands of our southwestern deserts provide habitat for many special status species of wildlife and rare plants,” said Michael Connor, California Director for Western Watersheds Project.  "If these species are to survive in the face of climate change, we need to protect their habitat, not convert it into an industrial wasteland."

The groups have worked to highlight the environmental destruction and waste associated with industrial solar and to raise public awareness of distributed generation (DG)—the localized, efficient, democratic, and cost-effective alternative. DG puts solar generation at the point of use. Germany has proven that massive installations of distributed solar photovoltaics can be achieved rapidly when it is a policy priority.

In the complaint, the groups assert that the BLM violated NEPA by failing to examine two additional alternatives: a distributed generation (DG) alternative, and an alternative in which solar energy facilities would be sited on previously degraded or damaged lands. The groups, as well as the Environmental Protection Agency, called for analysis of these alternatives during comment periods, but BLM ignored them.  An essential purpose of NEPA alternatives analysis is to inform better decisions.  “Had these alternatives been analyzed next to the others, the superiority of the DG and degraded-lands options would be clear,” said Blaeloch.

As of mid-January, 11 solar projects had been approved on 41,350 acres of public land. The projects range from 516 to 7,025 acres, with the average power plant exceeding 3,700 acres. Pending proposals number 87, and would cover a total of 670,599 acres of public land. The 98 total approved and pending projects do not fall within the framework of the PEIS, which is designed to facilitate future projects under a more expedited review.

Massive solar power plants will have irreversible, essentially permanent, impacts. The BLM admits that ecological recovery after solar plants are decommissioned, if even possible, could take 3,000 years.

The Western Lands Project monitors federal land transactions and public land policy across the West and beyond. Its mission is to keep public land public.

Desert Protective Council works to safeguard desert areas of unique scenic, scientific, historical, spiritual or recreational value and to educate children and adults to a better understanding of the deserts.

The complaint can be viewed at http: //www.scribd.com/doc/125184283/PEIS-Final-Complaint

Information about and links to Salazar’s decision can be viewed at http://www.blm.gov/wo/st/en/info/newsroom/2012/october/NR_10_12_2012.html

Information on the EPA’s program for siting renewables on damaged and contaminated lands can be found at http://www.epa.gov/renewableenergyland/

The EPA’s comments on the PEIS can be viewed at http://www.epa.gov/region9/nepa/letters/solar-energy-six-states-DPEIS.pdf (see pages 4-10)

Articles about Germany’s success and the potential here in the U.S. can be found here:

Somebody needs to stop this INSANITY!

When even the BLM admits it might not be possible to restore our precious public lands back to the way they are now, we need to face that reality NOW and decide what we really want to leave behind as a legacy in the name of GREED!

It seems the people have spoken, but nobody is listening.