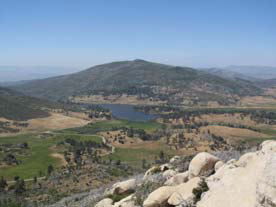 July 12, 2014 (Cuyamaca) -- The Cuyamaca Rancho State Park General Plan Webpage has been updated to indicate that release of the Preliminary General Plan/Draft EIR has been delayed until August 7, 2014  due to time required to incorporate all comments submitted.  California State Parks is proposing to adjust select wilderness boundaries and decommission particular areas of existing wilderness at the Park.

The park seeks public input as it develops the General Plan.  The website states, “We continue to welcome your questions, comments and concerns via e-mail at enviro@parks.ca.gov. A formal written comment period will take place during the public review period for the Preliminary General Plan/Draft EIR, for which responses will be provided. This combined document is scheduled to be available August 7, 2014.

A last opportunity for comment on the General Plan/EIR will occur at the time of the State Park and Recreation Commission meeting currently scheduled for November 14, 2014. At this meeting the Commission will vote to approve the General Plan.