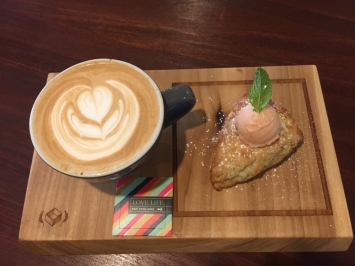 Downtown La Mesa has been going through lots of changes, including street repairs and new ownership of restaurants and coffee houses. In September, Public Square opened in the space last occupied by Cosmos Coffee at 8278 La Mesa Boulevard. For those who grew up in La Mesa in the 1970s, this is directly across the street from the much loved but long-gone Logan’s Bakery.

Public Square has a different menu and vibe than Cosmos did. It reminds me of coffee houses in Portland, Oregon, with a minimalistic and industrial look in grays and bright yellow. One wall has a bright modern art mural of polygons in yellows, grays and blues. The other wall has paintings for sale or just to admire. 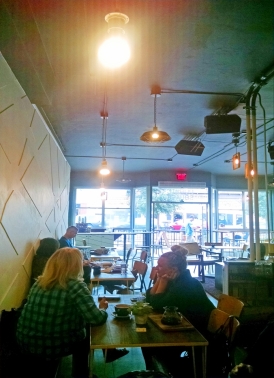 There is one sofa and a couple of conversation chairs, but most patrons will sit at the simple tables with school chairs salvaged from a 1940s schoolhouse. This is a place to come and take your time, work on your laptop, or listen to the music.

The unique and upscale menu offers coffees, teas, beverages and eats. Your coffee might be served in a small glass pot. The food is divided into sweets and savories. The emphasis is on quality and presentation, not speed; it’s a place to linger and savor.

On my first visit I tried the scones and was very impressed. For those of you who have only tasted cakey, overly sweet scones, get ready for bliss. These scones are fluffy like a biscuit. The baker makes the scone unflavored and you may order a flavored butter. I tried several of the butters and pumpkin spice was my favorite. The scones and butters are the creation of Laura Henderson, the owner’s wife.

Our vegan hummus plate was very tasty but a bit on the small side. The baked eggs and tomato dish was served very hot and spicy. It was loaded with Italian flavors and very filling.

Aaron Henderson, a co-owner of Public Square, is from La Mesa. According to the manager, Kaleb Ede, the philosophy behind Public Square is to provide an amazing product but not to be pretentious. They want to be a part of the community and create a place that can be an incubator for the staff to create and learn. For example they buy coffee beans and teas through direct trade with the roasters and make their own syrups for the coffee drinks.