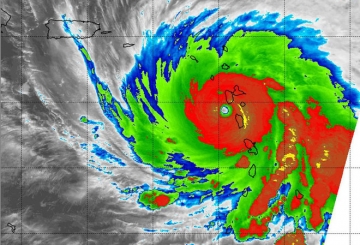 September 20, 2017 (San Diego) — The eye of Hurricane Maria passed almost directly over San Juan, the capitol of Puerto Rico.  The powerful storm made landfall with 155 mile per hour winds—just 2 miles per hour short of Category 5 status.  It’s believed to be the strongest hurricane in at least 80 years to hit Puerto Rico, a U.S. territory home to 3.5 million people.

For Puerto Rico, where the territorial government was already struggling to pay its bills after a decade-long depression, finding resources to help survivors rebuild will be challenging.

Puerto Rico’s Governor Ricardo Rosselio has asked President Trump to declare a disaster.  Rosselio says up to 90% of the island’s population is without power.  Many homes and municipal buildings have been damaged across the island by high winds and flooding.

Over 11,000 people have sought refuge in hundreds of shelters, some still reeling from impacts of Hurricane Irma a week earlier, though Irma spared Puerto Rico a direct hit.

The Federal Emergency Management Agency or FEMA has indicated it has 3,200 personnel positioned to help after the storm.

Maria will most likely turn northward but is not expected to hit the eastern seaboard of the United States.