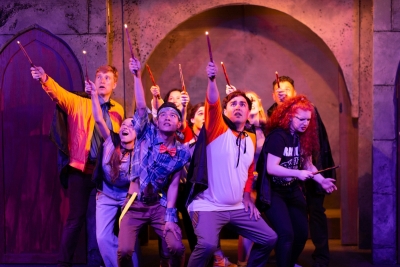 June 19, 2019 (Poway) - Do we need another theatre group in San Diego?  I personally can never get enough theatre.  Eastern is a new Semi-professional company which plans to have a home in East County, thus Eastern. The founders are from East County and were raised there. For this show, the venue fell through and Poway Performing Arts Center (POWPAC)  welcomed them with open arms. 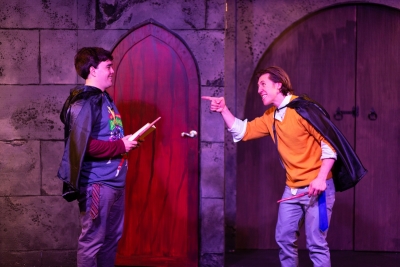 Puffs is a parody that takes place alongside Harry Potter. Three lesser misplaced individuals come together to fight their own battles in the world of wizardly magic. Even though Harry and friends are kinds of nerds themselves and less than popular, they become the heroes. The Puffs--Wayne, Oliver, and Megan, like most kids dream of being great but are destined for something else. A comedy with a heart, Puffs has us laugh at the familiar spoofed and empathize with the Puffs in us all. The four houses at this school are Braves, Smarts, Puffs, and Snakes (rich, blond jerks). The sorting hat places Wayne, Oliver, and Megan together as Puffs. We follow them through the seven years of the Harry Potter world.

I read all the Potter books and watched all the movies. I caught a lot of the jokes, but it's been a while. The more a fan you are, the more you'll laugh. 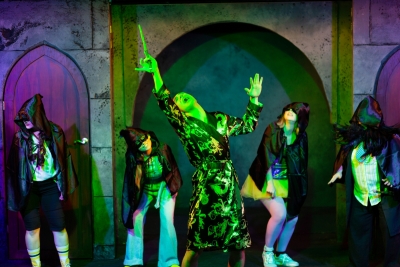 Fifteen cast members poured everything they had into their roles. Their enthusiasm and talent create newly enriched characters to love. Travis Rynders narrated the story of this somewhat familiar world, compelling us with his own brand of magical storytelling. Kevin Patrick Lohmann plays Wayne, all he wants is to be the hero. Kevin Phan as Oliver, who wants to find his place in the world and Sterling Amara as Megan.  I'm sure many of us fell into one of these categories as teens and maybe still do.

For me, Trevor Cruse stood out. He played Cedric and the Dark Lord, doing an outstanding job--extremely talented. The entire cast brings us a talent that will abound for years to come.

The stage is constructed as a castle perimeter with several doors. The set looked great and was well constructed.

This is a must-see show for Harry Potter fans. This is the San Diego premier and is not even restricted. It opened in New York for a short run in 2015 and is now enjoying a record-breaking run. In Australia, it has become the longest running play of the last century, 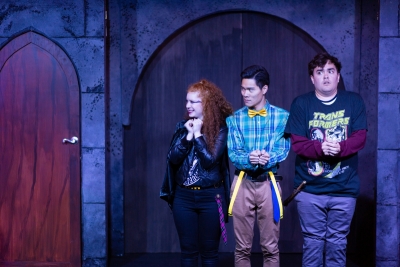 "The Eastern is San Diego's newest semi-professional theater and exists to provide artists with a space to collaborate, create and grow.  The Eastern focuses on Actor training and artist development while providing paid opportunities for theatre artists to work on diverse professional shows."