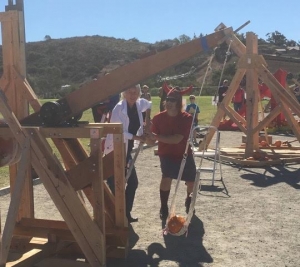 San Diego Padres TV broadcast announcer and Alpine’s own Mark Grant emceed the event and provided play-by-play commentary for the competition which featured six teams. Each team had designed and built their own trebuchets or catapults to launch pumpkins.

San Diego County Supervisor Dianne Jacob participated in the event’s Opening Ceremonies that included the presentation of volors by members of Cub Scout Pack 105 and Boy Scout Troop 105 as well as the singing of the national anthem by DJ Rod Galloway.  Dianne Jacob got the competition underway by pulling the lever and launching the ceremonial first “chunk”.

Each team competed in two separate categories, one for distance and one for accuracy. Chris Newcomb, AEF President and Competition Manager stated, “The goal for this event is to put together a family-friendly, educational fundraiser to benefit Alpine schools while also promoting the science and math behind building the launchers and accurately shooting the pumpkins”.

Winners of the $500 A-List Properties Champion Chunker for Distance Award were the Fling Kings representing the JMMS iDream Academy.  They also won the $250 Viejas Band of Kumeyaay Indians 2nd place award for Accuracy.   Team captain, Ed Sanchez, generously donated the prize money right back to JMMS to benefit the students of the iDream Academy.

Even the Alpine Union School District employees were well-represented by the entry of a team from the District Office named the D.O. Upchuckers headed by Superintendent, Bruce Cochrane.

AND, what would a Punkin Chunkin be without pumpkins?  Thankfully, in a year that has experienced a shortage of pumpkins, Barons Market donated over 120 pumpkins for the smashing! Oma’s Pumpkin Patch donated an additional load for even more launches.

About the Alpine Education Foundation (AEF)

The Alpine Education Foundation promotes and supports academic excellence for pre-kindergarten through 12th grade students in East County, including Alpine and Blossom Valley. Their mission statement is to generate funds that support educational opportunities for students of the Greater Alpine Area to better prepare today’s youth for the future; through programs supporting the use of technology in the classroom, innovative practices, enhancing staff professional development, and supplementing teacher support to allow for small group and individualized approaches to student learning.