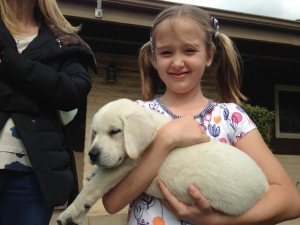 Photo: Missing pup has been reunited with his owner; photo courtesy 10 News

March 7, 2015 (El Cajon )—A puppy stolen from the backyard of an El Cajon home is back home, thanks to a story aired by ECM news partner 10 News.

At 4:30 p.m. yesterday, El Cajon Police received a call from Jeff Norton, who reported that his young daughter’s purebred Labrador puppy had been stolen from their home on Lexington Avenue. A neighbor caught the theft on video with a surveillance camera showing two suspects with a pickup truck.

He turned the footage over to 10 News. When the video aired, a local mother recognized her daughter taking the dog that she had claimed to have found. The mother brought her daughter, a juvenile, to the El Cajon Police Station with the puppy.

Officers arrested the girl and released her into her mother’s custody. The second suspect, a male, is also believed to be a juvenile though the investigation into the second suspect’s identity is ongoing.

Since the dog was purchased for $1,000, the crime is considered grand theft.

Lt. Rob Ransweiler said that after processing the juvenile, the puppy was driven back to the Norton residence on Saturday, “but not before he left some bite marks on the officer’s ticket book.”

Anyone with additional information regarding the outstanding suspect in this incident is encouraged to contact the El Cajon Police Department at 619-579-3311.