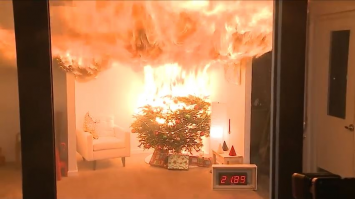 An unwatered tree burns as quickly as newspaper, according to the National fire Protection Association

December 21, 2016 (San Diego)--The holidays can be a joyous time, but only if you prevent winter weather-related house fires.

How big a danger is this? According to the National Fire Protection Association, between 2010 and 2014, U.S. fire departments responded to an average of 210 home fires per year that started with Christmas trees. These fires caused an annual average of 6 deaths, 16 injuries, and $16.2 million in direct property damage. A

dd to that an estimated average of 860 home structure fires per year that began with decorations, excluding Christmas trees from 2009 to 2013. These fires caused an annual average of one fire death, 41 fire injuries and $13.4 million in direct property damage.

Winter weather coupled with the holidays presents numerous opportunities for hazardous fire conditions,” said Kelly Gaffrey, fire code specialist with the San Diego County Fire Authority. “Because we don’t experience winter-like conditions on a regular basis in San Diego, the tendency can be for people to not pay attention to things like regular cleanings of the fireplace and chimney, maintenance of their home heating system, and following the directions for safely using a portable heater.

“With all the hustle and bustle of the holidays, it’s easy to get caught up in the excitement of the season and overlook some simple things you can do to keep your family safe,” Gaffrey said.

Six things you can do to prevent a home fire:

Most of the tree fires happen after Christmas, after a cut tree has dried out, and often start overnight when trees are left lit, Gaffrey says. Cut trees need to be properly watered. In our generally desert climate, people need to check water levels every day. Even then, eventually it will dry out. Put the tree out promptly for proper disposal or recycling after the holidays to reduce the risk for fire.

“Leaving it up much past Christmas or New Year’s, you could be asking for problems,” Gaffrey says. “It’s amazing how quickly a tree can burn up and everything around it too. The speed is just mind-boggling.”

Here’s a video that illustrates this point. The drier tree is fully engulfed in flames in 30 seconds.

Never place any tree near a heat source such as a fireplace, furnace or space heater. Unplug lights when leaving the house or going to sleep. Be especially careful if using lights that heat up — and don’t put them near heat sources, curtains or other flammable materials.

The more holiday lights the better, right? Well, safety must take the priority over dazzling, when it comes to stringing up lights or other electrical decorations. Electrical safety is especially important in older homes which weren’t wired to today’s electrical load limits. Back in the 1950s and 1960s, there weren’t microwaves and computers and other big electricity-drawing appliances.

Make sure you buy holiday lights that have been tested for safety by an independent laboratory. Check for a label. Follow directions for safety, don’t hang indoor lights outside – or vice versa –and don’t plug too many items into an electrical socket. Don’t string together more than 3 strands of lights, Gaffrey said. And don’t connect LED lights and non-LED light strands, he said.

Some type of electrical distribution or lighting equipment was involved in one-third or 35 percent of home Christmas tree fires, according to the fire protection association.

Besides untangling your light sets, inspect them to make sure they are in good condition. This means checking for exposed wires or shattered bulbs and sockets since they pose a fire hazard. In most cases, light sets should be replaced unless it is just a bulb that needs changing. Sometimes pets can chew on wires, so you may need to inspect often. If you need to buy new lights, LED lights tend to be cooler and significantly reduce the risk of fire. LED lights are also shatterproof and shock resistant.

Candles are a big part of season for many people, but they can be dangerous if left unattended while lit. They need to be placed on a sturdy surface out of reach of children and pets, and away from flammable materials including drapes. Use stable candleholders and use the appropriate size candle for the holder.

A little more than half of December home decoration fires were started by candles. The top three days for home candle fires were Christmas, New Year’s Day and Christmas Eve.

The most important thing with fireplace safety is having it professionally maintained by a certified chimney sweep once a year, if it is used with any frequency, says Gaffrey. Never use excessive paper or flammable liquid to start a fire. Use a metal or glass screen to keep embers in the fireplace opening. Never leave a fire unattended or burning overnight.

Set up space heaters in a clear area

No one in other parts of the frozen country believes us when we say that San Diego can indeed get chilly, but it’s true. And during those times of the year, many people turn to space heaters rather than a furnace because it can be less expensive. This is especially true in large or older homes where the insulation is poor and heat escapes quickly. If you’re using a space heater, make sure it’s a good quality model that has been professionally tested for safety. Set up the heater with nothing around it such as drapes or furniture, which can catch fire either from directly touching it or from radiant heat. Never leave a space heater on overnight; heat up your room before you go to bed and then shut it down, says Gaffrey. Be aware that a space heater draws a lot of electricity and should be plugged into its own outlet. Extension cords are not recommended.