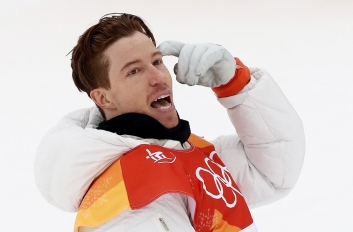 February 13, 2018 (Pyeonchang, South Korea) - The buzz surrounding Shaun White’s return to the Olympics was like wondering if Sam and Diane would finally become an item on Cheers.

But Wednesday, Shaun White put all those questions to rest.  He’s here and here to stay.  And, like his teammate Chloe Kim, he’s here to make history.  He's here to make sure people remember his name.

But if you're an athlete, you know that almost perfect isn't perfect.

So what does Shaun do?  He goes into the final round and tallies a 97.75.  That's higher than Chloe Kim and, more importantly, earned him his third Olympic Winter gold in his fourth Olympic Winter games.

But he had competition; 19-year-old Japanese phenom Ayumu Hirano posted a 95.25 on his second run.  Australian Scotty James posted a 92 on his first run.  Speaking of 19-year-olds, the average age of White's competitors?  21.9.  All going up against a 31-year-old.  That takes some guts.

White is now the only snowboarder to ever win three gold medals at an Olympics after being hurt at the Sochi Games four years ago.  And it wouldn't be a Shaun White medaling without the medal being medal number 100 for Team USA in Olympic history.