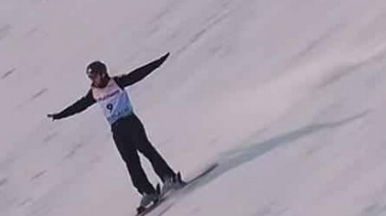 February 17, 2018 (PyeonChang, South Korea) - Pittsford, New York's Jon Lillis was halfway across the world when his brother died in October.

"We're coming home," he told his father after hearing the news that his brother had died in his sleep.

Jon and his brother Chris were about to let their lives go.  But then they remember that Mikey, an Olympic hopeful himself, wouldn't let them do that.  On Saturday, Jon qualified for the men's aerials, avenging his brother's death.

His first round jump was perfect; a crisp 127.44 point back full/double full-full to launch him right into first place.

The Pittsburgh native relocated to the Netherlands last year to receive better training after spending most of his life with Korean coaches, eventually settling in Korea after training in Washington D.C. and Salt Lake City under Korean coaches.  It worked.

“My mindset was, going into the Games I would rather make a huge change and fail completely than stay in the same place and not improve at all,” Krueger said.

Ironically, he was skating with two Koreans.  And Kreuger just barely made it, seven seconds past Yira Seo, who took bronze.  Canada's Samuel Girard took gold.

Kreuger advanced to the semifinals on a skater's penalty, which was also ironic, cons 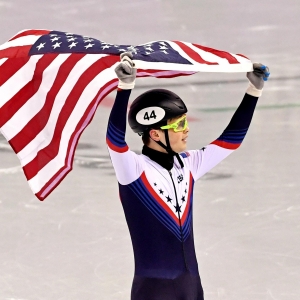 idering he was penalized and knocked out of the 1,500 semifinal.

“Besides getting the Olympic medal, I think the second greatest thing is knowing all the decisions I made leading up to these Games were right,” Krueger said. “There was lots of moving, lots of hard decisions to make, but I'm on the podium.”

In the women's 4x5 kilometer cross country skiing relay, Kikkan Randall, Sophie Caldwell, Jessie Diggins and Sadie Bjornsen finished fifth.  It wasn't gold, but it was the best-ever finish for the American women at the Winter Olympics, just 36.8 seconds back of a medal.

Norway beat out Sweden for the first gold in eight years by two seconds.  The Olympic Athletes from Russia took bronze.

“While we tend to be really focused on the medals, we know deep in our hearts it’s so possible,” said Randall, a five-time Olympian who is competing at her last Games. “I still think it was amazing to put together four strong legs today and to get that best ever result and keep the pathway going forward.”

“All four athletes are clearly in top shape, and we feel this team is our best chance to bring home a medal for the USA," said head coach Chris Grover.

“We’re going to walk away proud of what we did here today because there’s more to it than just medals,” said Diggins. “Seeing everyone go out there and lay down a solid race and give it everything they had, that’s what really matters.”

“Our team has more belief than we’ve ever had, and it’s just so motivating and exciting,” said Bjornsen. “We show up to every race so excited to see what we can do and get goosebumps just standing on the start line.”

But the women aren't done yet.

“We had to leave something for the next generation to go after,” Randall said. “I mean, come on, this group, we’ve had a lot of firsts. But there’s a really awesome young group of girls coming up with junior world podiums in the relay.

“So I think there’s high hopes, and we can hopefully leave a good path for them.”