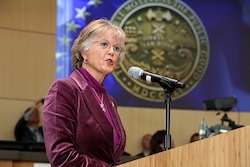 June 17, 2013 (San Diego’s East County) – There has been a great deal of talk about little places like Campo, Boulevard and Ocotillo ever since construction began on the Sunrise Powerlink.  There have been multiple lawsuits as environmentalists, Native Americans and other East County residents have fought to protect their habitat, ancestral lands and homes from the encroaching pace of “development.” As much of this area lies within the East County District represented by County Supervisor Dianne Jacob, I sought her perspective about what is going on.

1. How do the people of East County feel about the industrial scale wind and solar projects going into their midst? Are we hearing from a vocal minority? Or are they representative of a widely held sentiment? How do you know this?

Dianne Jacob: “My constituents and I have raised serious concerns for years about the potential impact of industrial-scale energy projects in our backcountry. This isn’t a case of a vocal minority making noise. I hear concerns all across my district, in many communities, that these mammoth projects threaten to destroy natural resources, heighten the risk of wildfire and rob rural communities of their quality of life.”

2. Do you believe their concerns are justified?

Dianne Jacob: “Their concerns are justified. That was made clear last year when SDG&E completed Sunrise Powerlink. The giant transmission line destroyed miles and miles of once-pristine landscape and has increased the risk of wildfire in an already fire-prone area. Many of my constituents worry that the line is just a sign of things to come as developers step up their efforts to build large energy projects in the backcountry.”

3. Do you think some craziness/paranoia has crept into this debate? (ie Does it seem like people – on either side –  are starting to imagine things that have more basis in imagination that fact?)

Dianne Jacob: “No. What I do see are a lot of passionate people who want to safeguard their communities and their quiet, rural way of life. They don’t like outside corporations coming in and turning open land into industrial hubs, with little regard for the area.”

4. Do you believe that these industrial scale wind and solar projects are being forced upon East County?

Dianne Jacob: “Some developers have tried to take advantage of our sparsely populated communities in the backcountry. Folks in many of these areas usually don’t have the resources and big-city consultants that developers do, so fighting a major project becomes an uphill battle.”

5. What courses of action can you see for the People of East County to follow? Do you have any advise?

Dianne Jacob: “I would advise residents to continue to do all they can to challenge these projects if they believe they are a bad fit for their community. During the battle over Sunrise Powerlink, community leaders challenged the project in court. They may need to continue to look to the courts for help if they think a project threatens their quality of life.”

The Wind Projects going into East County. Note the location of Boulevard and, across the border in Imperial County, the Ocotillo Wind Farm.