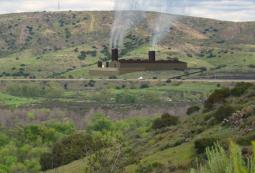 Cogentrix had argued that the Quail Brush gas-fired “peaker” power plant was necessary to meet energy needs when there is now enough wind or sunshine for large-scale wind and solar projects.

Carlyle's 2009 Annual Report confirms that Carlyle also founded Pattern Energy, developer of the Ocotillo Express Wind project, a site that has drawn criticism for minimal wind resources.  But now, if Quail Brush is built, Carlyle stands to profit whether the wind blows or not.

Two California Public Utilities officials have recommended denial of Quail Brush, concluded it is not necessary to meet our region’s power needs.  But the full CPUC could yet overrule that recommendation.

The Carlyle Group is one of the nation’s largest and most politically connected private equity firms. Carlyle’s founder, Frank Carlucci, is former Deputy Director of the Central Intelligence Agency (CIA) and former U.S. Secretary of Defense.    Over the years it has employed former president George H.W. Bush and former British Prime Minister John Major. The company is known for its military contracting businesses and also holds major stakes in hedge funds and other interests. Carlyle investors in the past have included the bin Ladin family.

But Carlyle has also been accused of ethics violations and other shady dealings.

Carlyle entered into a joint venture with Riverstone LLC, which acquired Pattern’s predecessor.  The deal was described by ABC News as a pay to play” corruption scandal.”  Carlyle paid $20 million to resolve the investigation by New York’s Attorney General.

Riverstone’s founder, David Leuschen is a former director and managing director at Goldman-Sachs.

Goldman-Sachs also owned Cogentrix prior to the acquisition by Carlyle.

Carlucci, founder of the Carlyle Group, has a long history of controversy dating back to when he was stationed in the Congo with the CIA, when rumors surfaced accusing Carlucci of having a hand in the assassination of a Congolese official; Carlucci and the CIA have denied this. For details see the Encyclopedia of the Central Intelligence Agency. The book The Iron Triangle: Inside the Secret World of the Carlyle Group claims that Carlucci and/or Carlyle entities have been accused of arms scandals and bribery.

Serious questions are now being raised about the viability of the Ocotillo Express Wind project. Videos taken daily since the project went online in December, shot by an engineer who resides in Ocotillo who has long predicted that the site would not have adequate wind, appear to show virtually no wind, with turbines standing idle. (See links below).

If the same company owns both the wind turbines and the gas-powered peaker backup plant, however, then if Quail Brush is built, Carlyle stands to profit even if its wind site in Ocotillo lacks adequate wind resources.

The California Energy Commission employees participate in the calPERS pension plan. calPERS is one of the founding partners of the Carlyle Group. The CEC counsel for the Quail Brush hearings told the public when questioned about this at a public meeting, that the California Fair Political Practices Commission does not consider this a conflict of interest!