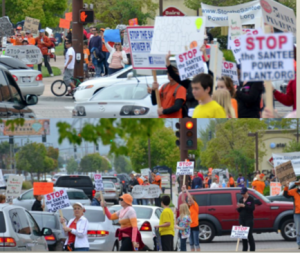 September 12, 2014 (San Diego) – There won’t be a gas-fired power plant built next to Mission Trails Regional Park. Plans for the controversial project have been withdrawn at the request of a letter sent by Quail Brush GENCO LLC, the project applicant, to the California Energy Commission on September 12.

The project had faced strong opposition including city councils of both Santee and San Diego, the Santee School District, environmental groups and residents.

Preserve Wild Santee posted the following message on its Facebook page upon hearing the news:

“Victory - Quail Brush Power Plant withdraws its application! The 100 MW plant that would have despoiled Mission Trails Park while burning fracked gas is history. However, the 300 MW Pio Pico plant is still alive and we will need help from the court to kill it. Arguments are being submitted to the court now. Thanks to all that have participated in both of these efforts and especially to our joint intervenor partner, the Center for Biological Diversity!”

Who owns the land? Will it be preserved as open space or will it be developed?