July 7, 2010 - A strong earthquake jolted East County at 4:53 p.m. today.  The quake, which was centered 13 miles north northwest of Borrego Springs in San Diego's East County, was initially rated a 5.9 on the Richter scale but subsequently downgraded to a 5.4 according to the U.S. Geological Survey.

"Montezuma Valley Grade had boulders rock and come loose, laying in the roadway, a citizen reported," a deputy at Borrego Springs told East County Magazine.  "They felt it was a safety hazard and I dispatched County Roads...Cell phone service went out for about five minutes also; all circuits were busy."

She added, "It felt equal in intensity to the Easter quake (a 7.2 jolt centered in Mexico)." The inn did not suffer any damage, she added. "We had to straighten pictures and that was it." 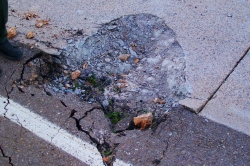 Cal-Fire reports a four-by-five foot boulder tumbled a thousand feet onto Old Highway 80 near Buckman springs, causes a foot-deep hole in the road.

In El Cajon's six-story City Hall, the quake was strongly felt and employees had to make their way out down stairwells, City spokesperson Monica Zech said.

At the Borrego Springs Resort, John Yzaguirre said employees are taking an assessment to determine if any damage has occurred but so far has found none. "We were lucky," he said.

On Mt. Helix, the shaking was extensive, with residents reporting a loud boom midway through the temblor.

Did you have damage from the quake?   Please post any info in the comments section below, or email editor@eastcountymagazine.org.

Some people said that they felt the shaking in Lakeside.
Very very bad for county...
DoFollow blog