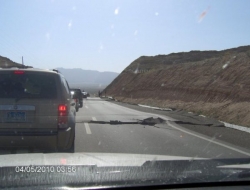 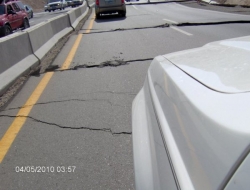 In California, Governor Arnold Schwarzenegger has declared a state of emergency in Imperial County. Hardest hit on the U.S. side of the border is Calexico, where historic buildings in several downtown blocks have been red-tagged as unsafe for occupancy. American Medical Response of San Diego and the San Diego Fire-Rescue Deparment and County of San Diego Emergency Medical Services have sent an advanced life support ambulance strike team and disaster support to Calexico, where they will assist local authorities in delivering emergency medical services.

In El Cajon, a downtown storefront window cracked and pictures fell off walls at City Hall.

At the Campo Indian reservation, tribal chair Monique La Chappa reported a broken window in the education center and a broken gas pipe; the latter occurred during this morning's aftershock. "We had a lot of road damage. I noticed a lot of new cracks in Church Road," she said.  Crews were assessing the casino and wind turbines, she added.  All turbines remain in operation.

Downtown, a building at 4133 Kansas Street was damaged. Guests were briefly evacuated from some hotels.

SDG&E spokesperson Allison Zaragoza confirmed that power has been restored to all SDG&E customers by this morning in all areas serviced by the utility. SDG&E has not responded to questions as to whether the utility sustained damage to any of its facilities in Mexico.

More than 500 aftershocks have rattled our region, including some centered on the U.S. side of the border in Imperial and East San Diego County.

“We were almost on top of it,” Sharon Courmousis, owner of Sacred Rocks Reserve in Boulevard, said of a powerful aftershock centered just a few miles away, though her facility was not damaged.

There is one bright spot from the tremors. Researchers from the U.S. Geological Survey report that the quakes have caused water tables to rise two feet beneath Balboa Park and National City, Channel 10 News reports today. The discovery means the two aquifers may be connected—and could result in a major new water source for our region.

Disaster like this happens unknowing, it shocks our sense as we encounter such a kind. But we can prepare for calamities timeshare relief.