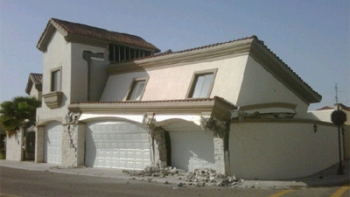 Major damage is reported in the U.S.-Mexican border city of Mexicali, which has approximately one million people, Reuters reports. A parking garage and a restaurant in Mexicali have collapsed, broken gas lines have sparked fires, and at least one person has died when a home was destroyed. The city is reportedly without power and a hospital has been evacuated.

Mexican news media reports that the toll road from Mexicali to Tijuana has also collapsed and the non-toll road is also closed, East County Magazine has learned from a Red Cross worker. She attributed better building codes to the fact that damage, while substantial, is not as devastating as in Haiti.

The quake was felt throughout Southern California. Electricity has been out in several areas, including Borrego Springs in East County. The San Onofre nuclear power plant, built to withstand a 7.0 quake five miles or more away, was closed temporarily to inspect for damages. Around southern California, highway inspectors have been out checking for damage on roadways and bridges.

California Highway Patrol has found boulders and cracks on Interstate 8 in Imperial County, as well as some unsafe bridges, according to the Union-Tribune.

“The Baja quake shook us up more strongly than any I can remember since about 1986,” said Julian resident Janet Gastil, a former Congressional candidate. An aftershock centered near Julian was also felt by Gastil. “Our house was really shaking.”

San Carlos resident John Pilch felt both the initial quake and a 5.1 aftershock centered near the Imperial-San Diego County line. “Shower doors were hitting each other, the chandelier was swinging and the weights in our grandmother’s clock are still moving from side to side,” he wrote in an e-mail shortly after the second temblor struck.

In San Diego, the Sheraton Hotel on Harbor Island was evacuated. At Lindbergh Field, terminal 2 closed briefly, forcing some passengers to go through security checkpoints twice. A Chula Vista teen fell down stairs and hurt his head, the Union-Tribune reported.

The quake sent high-rise buildings swaying in Los Angeles and was felt sharply as far away as Arizona. ECM received an email from an East County resident in Tucson who reported being jolted by the tremor.
Aftershocks moved northwest following the quake, triggering jolts of 3.4 near Julian, 4.5 near Jacumba Hot Springs, and 5.1 near Imperial late this afternoon.

The quake occurred at the junction of two tectonic plates, the Pacific and the North American, which extend from Baja into California. It has been seismically active for the past year, the L.A. Times reports The quake is most likely centered on a strike-slip fault which cuts through the ground vertically, causing land to move horizontally.

A seismology expert at Cal Tech predicts there is a less than 5% chance that the 7.2 earthquake will trigger an even larger quake in the next several days, the L.A. Times reports.

For up-to-the-minute information on earthquakes in our region, visit www.usgs.org.

I'm sad to know.Thank you for sharing.