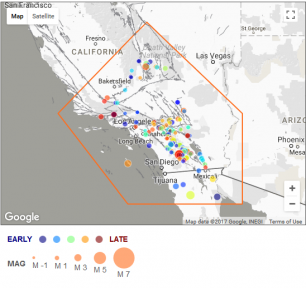 December 9, 2017 (Julian) — Residents in the mountain town of Julian have had more than a power outage to cause frayed nerves.  Numerous small earthquakes have occurred, including a magnitude 4.0 quake Wednesday that has triggered 76 aftershocks.

Jennifer Andrews at the Southern California Seismic Network posted on the SCSN network yesterday that more aftershocks can be expected, adding, “There is a small chance (about 5%) that a larger quake could occur, with the likelihood decreasing over time.”

The quakes are occurring along the Elsinore fault line, about 14 kilometers northeast of Julian at a depth of around 11 kilometers.

ECM readers from Borrego to La Mesa have reported feeling some of the tremors, but no where were the jolts more jarring than in Julian.

But some residents gathered together during the power outage, took the earth-shaking in stride.

“I think a good part of the town is here tonight at Wynola Pizza Barn,” Chip Jarman posted. “The grids are slowly coming back on line as we had one more earthquake as a sendoff to the departing Santa Ana winds.”

Another Julian resident, Rufus Smith, found the activity “concerning,” adding, “It can be one of two things, lots of little ones and it runs out of juice, or its marinating for a big one.” He advised neighbors, “Be safe and be ready.”