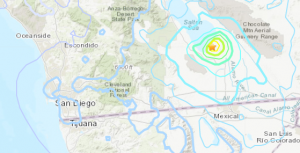 June 6, 2021 (San Diego) – More than three dozen earthquakes struck Imperial County yesterday before 12 noon, centered near Calipatria and the Salton Sea. The strongest tremor measured 5.3 on the Richter scale, with a depth of 5.8 kilometers.

The temblors were felt across Southern California including the San Diego region, according to the U.S. Geological Survey website’s shake map.

The USGS forecasts that there is a 9% chance of one or more aftershocks stronger than 5.3 in the next week; smaller quakes are likely to continue. “This earthquake could be part of a sequence. An earthquake sequence may have larger and potentially damaging earthquakes in the future, so remember to: Drop, Cover, and Hold on,” the USGS site states. 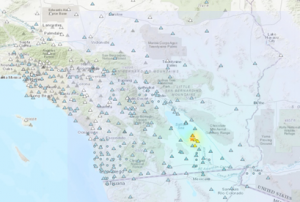 The USGS advises the public to use caution in or around vulnerable structures such as unreinforced masonry buildings.