June 14, 2019 (La Mesa) – Why can’t the La Mesa Village Association produce a federal tax ID number required of all organizations? Why has it never filed either a tax return or an application for tax exempt status with the state Franchise Tax Board?

After a reader inquired about the merchant groups’ nonprofit status, East County Magazine began an investigation. The findings show apparent noncompliance with federal and some state requirements.

The LMVA website states that it is a nonprofit organization. The group has entered into contracts with the city and organizes events such as Oktoberfest, Holiday in the Village,  classic car shows and the La Mesa farmer’s market.

The Secretary of State website indicates the LMVA filed for incorporation as a 501c6 business owners trade association on August 2, 2016. A type of mutual benefit corporation, a 501c6 benefits its members, not the public.

The LMVA replaces a defunct predecessor, the La Mesa Village Merchants Association, or LMVMA. The old LMVMA group obtained tax exempt status with the state and federal governments, had a federal Employer ID number, and filed annual federal and state tax returns before dissolving due to owing the city of La Mesa some $40,000 that it was unable to repay.

The new group, the LMVA, did not complete requirements to file a list of officers with the California Secretary of State until 2017.  When we checked the site in mid-May the organization was delinquent in meeting a requirement to file every two years and had a defunct address on file.  We contacted the LMVA and soon after, on May 24, 2019, they did submit a new filing to the Secretary of State with the current list of officers: president Peter Soutowood, Secretary Pam Slater, and Chief Financial Officer Theresa Favro.

However, all organizations, including all nonprofits and all 501c6 groups, are also required to obtain a federal Employer Identification Number (EIN), also known as a federal tax ID number, from the Internal Revenue Service (IRS) within a short timeframe after filing for incorporation in a state.

The organization must then submit annual filings to the IRS, whether or not the organization is tax exempt, according to the IRS. While there are a few exceptions, the LMVA does not appear to qualify for any of those.

East County Magazine has repeatedly e-mailed the LMVA secretary, Pamela Rader, to request the LMVA’s federal EIN number, but she has not provided one. On May 31, she wrote, “I wanted to let you know that based on our research we have found that all required forms for the LMVA's nonprofit status have been submitted.” But when we asked again on that same date for the federal EIN number, she did not respond.

The IRS website states, “If an organization does not file a required return or files late, the IRS may assess penalties. In addition, if an organization does not file as required for three consecutive years, it automatically lose its tax exempt status.” (emphasis added). It is unclear what the federal penalty may be for a 501c6 that never followed up on obtaining a federal EIN ID number or filing for exempt status to begin with. However the state has the power to revoke state nonprofit status for organizations that don’t obtain a federal EIN number within a few months after incorporating at the state level. In fact, the state revoked the nonprofit status of former El Cajon Councilman Ben Kalasho’s Miss Middle East Beauty Pageant USA for failing to provide an IRS letter proving that a federal EIN number had been obtained.

A 501c6 organization is also required to submit annual filings to the Franchise Tax Board, whether or not they have filed for tax exempt status. Tax exempt organizations are exempt from income taxes but must still pay sales tax, such as on sales of beer or other products sold at the LMVA’s annual Oktoberfest. The Franchise Tax Board has advised ECM in a letter that the La Mesa Village Association has never submitted any filing, nor applied for tax exempt status.

Since the organization has never filed for tax-exempt status with either the Franchise Tax Board in California nor the IRS, presumably the LMVA would owe income taxes on is revenues – tax liabilities that could have been avoided by filing for exempt status with the state and federal governments.

While it is certainly possible that the current officers were unaware that the original officers apparently failed to apply to the IRS for a tax ID number or to the state Franchise Tax Board for a tax exempt status, it is baffling how the chief financial officer and the rest of the board could have failed to assure that annual tax filings were made to the state and federal governments, or provide oversight of these critical financial matters.

What about donations made to the organization?  Even if a 501c6 has filed for and obtained an exemption from income taxes, donations made to such groups are not deductible as charitable donations on the donor’s federal income tax return.  However, they can be deductible as trade or business expenses in some circumstances—but only if the organization has filed for exempt status, according to the IRS website. It is unclear whether any businesses that have donated items to the LMVA may have believed their donations could be written off as trade or business expenses, 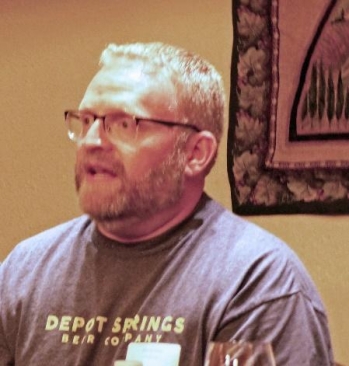 If the organization has not filed for tax exempt status, then it could be assessed for income taxes and penalties by both the state and federal government potentially, as well as for sales taxes made at LMVA events. But a letter from founding LMVA chair Aaron Dean thanking a donor  for a “generous donation” references the “generous support of people and organizations” for the 2017 Holiday in the Village event. (photo, right: Aaron Dean)

At one point, city council minutes reflect that Mayor Arapostathis and then-Councilman Guy McWhirter offered to help the merchants solicit donations for one of the organization’s early events to assure its success.

Read more about federal requirements for a 501c6 organization on the IRS website here.

ECM sent emails to Mayor Mark Arapostathis and to city manager Yvonne Garrett asking if the city had concerns about contracting with the LMVA given its apparent noncompliance with federal and some state requirements for nonprofit 501c6 groups.  The Mayor did not respond. Garrett sent the following reply:

I received your email  regarding the La Mesa Village Association and their non-profit status.  You asked whether the City has requirements for non-profits when entering into contracts.  The issuance of a special event permit by the City is for the regulation and safe assemblage of citizens at some form of a gathering.  As is often the case, the permit request will also include the safe closing of public right-of-way.  Chapter 10.50.010(b) of the La Mesa Municipal Code explains the intent of a special event permit as follows:

It is the intent of this chapter to subject special events, which consist of outdoor assemblages, events, and parades, as defined, to reasonable regulations designed to permit such gatherings to be held while assuring the safety and well-being of the participants, persons attending, neighbors and the general public, and to enforce these safety regulations.

The issuance of a special event permit to an applicant is not a binding contract between the City and the applicant.  It is a permit granted for the regulated and safe assembly of citizens.  There is no requirement that applicants for special event permits carry non-profit status.

Comments (re genecarp and oter): Mary England is the Business networking thing and former Republican candidate in Lemon Grove, NOT part of La Mesa Village Association or the bankrupt merchants group. Taste of La Mesa is fab and not connected to this, just praised by gene which oter objected

Article: Miriam i think it's great you let LMVA get part of the process done and checked off before disseminating; you are timely, graceful, balanced and fair with a strong sense of justice

Mary and the Chamber also helps with our local Veterans Families and Seniors in need during the Holiday Season! She’s more than worthy of our respect!

Maybe Mary England's problem is that she lived in La Mesa while she was on the Lemon Grove City Council. She stated on her La Mesa Planning Commission application that she was a resident of La Mesa for 5 years and that overlapped some of her time on Lemon Grove's council. There may be some benefit to La Mesa businesses but make no mistake, Mary England is only in it for the money. She leaves bodies everywhere she goes.

You sound very much like the mysterious T. Charpentier from LaMesa Today in 2014’ and a specific Candidate attack. The personal attacks continue?

I called Lemon Grove's city manager when this allegation first surfaced. As I recall, as long as Mary was a legal resident of the city when she ran, she was allowed to finish out her term even if she'd moved away.  It's been awhile but that's my recollection. Every city has different rules on such things.

Mary has of course done many good things for her Chamber and she also donates to some charitable cauuses.  The Lemon Grove Historical Society recently noted, "The Robert "Bobby" Carroll History Essay Competition for Grade 8 is underwritten by the Mary England Endowment for Education in memory of her late son," to cite one example.

Mary has also spoken with pride to me about her efforts to collect items to help homebound seniors during the holidays, and other charitable drives that she has spear-headed.

Please let's keep any criticisms here focused on facts, not personal attacks. If one wishes to compare the effectiveness of say, the Chamber and the Merchants' group, that's a legitimate topic for discussion.  Personal smears against hard-working people in any of these groups is not.

I do also know that Peter Soutowood genuinely cares about the village and has been around talking to some merchants who were ignored in the past.  He's inherited some cleanup work it appears to get the tax and nonprofit filings in order, but I do believe both of these groups have people at the helm who care about their communities.

This begs the question, are the city streets up for grabs by anyone to use and "make money" and be free from reporting or paying any taxes on goods sold? The city staff are stating that they just “hand out permits.” Which means that the city just wants to collect fees and does NOT care about the integrity of that permit or who applies. It seems that the city has a fiduciary responsibility, as well as an ethical one to make sure that the people that apply for a permit to use city streets and resources are producing a quality activity that reflects well on our citizens and do the right thing. If not, then I guess anyone that writes a check can apply and be granted a permit to use the taxpayers streets and public resources. Apparently there is no vetting at City Hall. And, I wonder if anyone that "sponsored" any of their events were told that they could write it off?

Again with different but the same kinds of problems! Why won’t the City of La Mesa work with the La Mesa Chamber? Over time Mary England has dedicated herself tirelessly to it’s success and yet what she has to offer keeps being rebuffed. Is it her style they don’t like? Is it that she ran for City Council? What is it that keeps our City Leadership from getting on board with the La Mesa Chamber of Commerce???