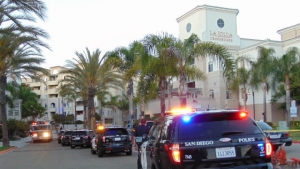 May 3, 2017 (San Diego) -- City Councilmember Barbara Bry and the chair of the San Diego Democratic Party questioned Wednesday whether the University City shooter was racially targeting his victims on Sunday.

Both called for a thorough and transparent investigation of the shooting that left one person dead and seven wounded at the La Jolla Crossroads apartment complex.

“The fact that almost all of the victims are people of color cannot be ignored,” said Bry. “The survivors of this attack have spoken out and believe that people of color were targeted by the shooter.”

Police Chief Shelley Zimmerman said Monday there was no reason to believe the shootings by distraught auto mechanic Peter Selis were racially motivated. He lived at the apartment complex and had just broken up with his girlfriend.

“There is zero information to indicate that race played a factor in this terrible and horrific crime,” Zimmerman said. “The victims were targeted for no other reason but their mere presence in the vicinity.”

“A reasonable human being on hearing the witnesses’ statements would naturally consider if racism was a key decision-making factor in the shooter’s choice of victims,” Hayes said. “It is possible to be in debt, to be lovelorn, and to be racist. They are not mutually exclusive.”

“The victims, their families, friends and loved ones, the communities, the city, the county, are all reeling, and all deserve to know about the thorough investigation conducted by the SDPD before the police chief announced there was absolutely no racism involved in his victim selection process,” Hayes added.

Bry said she was “hopeful that the investigation will shed light on the motives behind this devastating attack.”