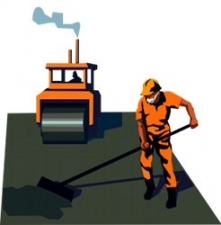 April 28, 2013 (El Cajon)- This past Tuesday, Michael Griffiths from the El Cajon Public Works Department gave a PowerPoint presentation to El Cajon City Council about the pavement maintenance program underway since 2006 and set for completion in 2014. City Manager Doug Williford stated that this program affects businesses and residents.

Before Griffiths began, he acknowledged junior engineer Katie Odiorne, who put the PowerPoint slides together. First, he presented a scale of old to new street pavings from 1-100.

“Our goal is to overlay the streets before it goes down to 30. The life expectancy of the new street is around 15 years.” To date, he revealed, “The city council has allocated $25.5 million and resurfaced 44% of the city streets.”

Funding has been provided by sales tax on fuel, Indian Gaming grants, and specific street obligations among other sources.

Griffiths added that the new streets have rubberized asphalt “which is quieter.”

Mayor Lewis, whose background is in refuse management, cited another benefit. “It helps with recycling.”