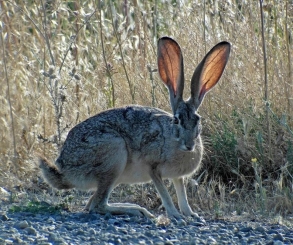 May 13, 2020 (Palm Springs) – After 10 dead jackrabbits were found dead on a private property near Palm Springs, a carcass has tested positive for Rabbit Hemorrhagic Disease virus type 2 (RHDV2) which is highly contagious and often lethal to both wild and domestic rabbits, as well as hares and pikas. The virus has been confirmed in state and federal lab tests.

The California Department of Fish and Wildlife (CDFW) is asking the public to report dead rabbits. Hunters, outdoor recreationists and owners of rabbits are asked to take precautions to prevent spreading the virus, which is hardy and remains viable on meat, fur, clothing and equipment for a long time, making it easily transmissible to other areas.

Infected rabbits and jackrabbits may exhibit no symptoms leading up to their sudden death, or may suffer from fever, swelling, internal bleeding and liver necrosis.

RHDV2 is not related to coronavirus. It does not affect humans or domestic animals other than rabbits, according to the CDFW. Although it has never been found in other rabbit populations in California, the disease has spread quickly in other states, causing mortalities of both wild and domestic rabbits in Arizona, New Mexico and Colorado.

CDFW Senior Wildlife Veterinarian Deana Clifford noted the introduction of RHDV2 to California could significantly impact wild rabbit populations, particularly those already at risk, such as the endangered riparian brush rabbit and those with limited distribution in the state, such as the pygmy rabbit.

"Unfortunately, we may also see impacts to species that depend on rabbits for food, as rabbits are a common prey species for many predators," noted Dr. Clifford.

CDFW will carefully monitor the progression of RHDV2 in California, including investigating and testing rabbits found dead, monitoring populations of endangered rabbits and working with partners, including the U.S. Fish and Wildlife Service, the California Department of Food and Agriculture (CDFA) and the U.S. Department of Agriculture.

CDFW is asking the public to report any sightings of sick or dead rabbits, hares or pikas  by contacting the CDFW Wildlife Investigations Lab at (916) 358-2790 or file an online mortality report through CDFW's website.

Outdoor recreationists should take precaution when hiking, camping or backpacking and not handle or disturb carcasses to minimize the potential spread of RHDV2. Additionally, hunters should take precautions to prevent spreading the virus, such as wearing gloves when field dressing rabbits, washing hands and burying remains onsite so that scavengers cannot spread the virus.

In California, hunting season for brush rabbits and cottontails opens July 1 and runs through the last Sunday in January. The season is open statewide, except for a closed area in the Central Valley near the riparian brush rabbit range. Hunting season for jackrabbits is year-round and statewide.

A vaccine for RHDV2 is not currently available in the U.S., thus domestic rabbit owners should practice good biosecurity measures to protect their animals from this disease, such as washing hands before and after working with rabbits, not sharing equipment with other owners and keeping their rabbits isolated from wild or feral rabbits.

Domestic rabbit owners who have a sick rabbit should contact their veterinarian. If domestic rabbits are found dead, please contact the local CDFA Animal Health Branch or call (916) 900-5002.

A "quick facts" reference guide can be found on CDFW's website.