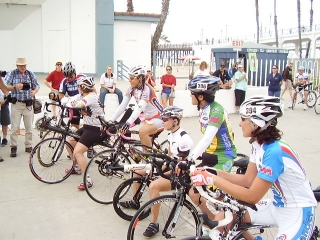 June 9, 2010 (Oceanside/Lake Henshaw) - Bicyclists lined up at the ampitheater next to the Oceanside pier Tuesday (June 8) to begin a 3,000 mile journey to Annapolis, MD in the annual Race Across America (RAAM). The participants included cyclists from as far away as South Africa. From the coast, racers headed the San Diego's eastern regions, then on towards the Arizona desert and beyond.

Weather conditions at the start were typical Oceanside 'June Gloom' with overcast skies and temperatures in the mid-60s. Unfortunately for the riders, these ideal conditions would only last for about the first ten miles of the race.

Tuesday's noon start was for women and senior solo riders. Male solo riders will start Wednesday (June 9) at noon. There are additional starting times for relay teams of two, four and eight riders.

The event poses numerous challenges on and off the course for solo riders. It takes a minimum of $20,000 to participate as each racer must not only cover the cost of the entry fee, but also a support crew and supplies.

There is a time limit (12 or 13 days depending on age and gender) to complete the course, which has intermediate checkpoints with cutoff times that racers must beat in order to continue. Cyclists must find the balance between maintaining a pace that allows them to finish but not go so fast that they lose their stamina. It takes a minimum of 20 hours per day on the bikes to realistically meet these time constraints, making sleep deprivation inevitable. 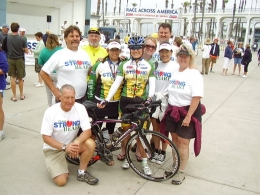 Amy, 41, started riding a bike as a youth in her native China. When she was about 13 or 14, she often sneaked her father's bicycle out for a ride. It didn't start out well for young Amy, who found herself covered with bumps and bruises from numerous failed attempts to stay on.

Amy discussed a physical checkup she had to take at school. The doctor was concerned she might have leukemia after finding her covered with bruises.

"The doctor wouldn't believe me, I told the doctor, 'I don't have leukemia' and the doctors said, 'look at all these bruises!', and I said, 'Well I'll be back in two weeks and it should be all gone."

Amy did not want anyone to know she was riding her father's bike, so she never gave up the reason for the bruises. Instead, she stayed off the bike for two weeks, the bruises went away and no one was the wiser.

"I think I learned that anytime you want to take on something you got to try it. Try it and you learn. If you fall don't be afraid and just try more, and eventually you will be just fine."

Difficult challenges are nothing new to Amy, who has degrees in engineering and in law. She did Race Across America in 2008, but as part of a four person relay team with two men and two women. Amy explained the difference between the relay and solo versions of the RAAM: 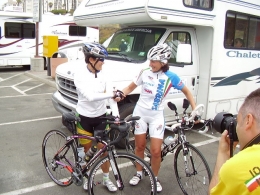 "Your speed is more important than endurance in that format. Pretty much we go all out for three to five miles depending on the terrain and then your teammate will go. So it's a very quick transition."

Amy went on to explain that on a four person team two of the riders rest four to six hours while the other two are rotating three to five mile segments at an all-out pace. It allows riders more opportunity to get rest.

"If you do solo, you have nobody really who can help you; it's total endurance, the longer you can stay on the bike, the better. So the key is to make sure you can sustain that kind of hours, so your pace is a lot slower." Amy will probably average about four hours per day off the bike with about two and a half to three hours spent sleeping.

Amy trains anywhere from 10 to 28 hours per week, with an average week ranging between 16 to 20 hours of training. Riders from Minnesota do not have the luxury of year round riding weather as California does, so cross training is a must for serious riders wanting to stay in shape.

"In Minnesota I do other things to cross train, like cross country skiing is a really good endurance type of sport. You can keep yourself pretty sharp on the endurance part of it," said Amy, "Whenever I can take a trip outside of Minnesota, I take one to be more specific on riding. I also do a lot of indoor spinning."

As mentioned earlier, Amy is racing as a part of Team Strong Heart. One of her crew chiefs, Sandy Roman, explained what the organization does:

"Team Strong Heart is a group of dedicated athletes and crew members dedicated to supporting Camp Odayin, that's our charity for kids that have heart disease. [The organization] has been in existence for about four years; this started in 2007. We're kind of under the umbrella of the Silent Sports Foundation. This is our second time around; Amy and I had been here two years ago."

The Minneapolis based charity puts on summer camps for kids suffering from heart disease. The kids get to swim, kayak and canoe and many other activities. The camp counselors consist of registered nurses and cardiologists as a precaution. It costs about $500 to send one kid to the camp. 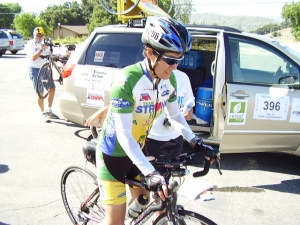 The riders' first time station stop was about 53 miles from the start. The course took them from the friendly climate of sea-level Oceanside on a 3,000 foot climb into 90 degree temperatures at Lake Henshaw.

Amy arrived at Lake Henshaw on schedule--a schedule based on detailed analysis of the course and terrain and an awareness of her capabilities.

"We want to prevent saddle sores as best we can; we also want to prevent infection. So our plan is to do clothing changes at least every four hours or as needed. So all her clothes are laid out, her shorts are buttered up with chamois butter, we'll change everything down to her socks."

With the five or six scheduled clothing changes per day, the support crew must do a lot of laundry to accommodate Amy's strategy. So far it looks like her engineering background has served her well in her planning, but there are still over 2,900 miles to go.

Stay tuned to this page as we will track Amy's progress through the race.

After passing the Lake Henshaw checkpoint, Amy continued past time stations at Brawley and Blythe before crossing into Arizona, where she stopped for the night at Parker. She is looking strong having completed 282.89 miles in 17 hours, 22 minutes with an average speed of 16.29 mph. She will rest for about four hours before starting her second day of riding.

Amy faced numerous challenges in her second day of riding. After leaving Parker, she made stops in Salome, Congress, Prescott and Cottonwood. Temperatures over 100 degrees, an elevation climb of almost 5,000 feet and 40 mph winds were among the adverse conditions that Amy fought through. A couple of legs between time stations saw speeds drop into single digits. After 1 day 16 hours and 35 minutes, Amy has covered 482.88 miles with an average speed of 11.9 mph. 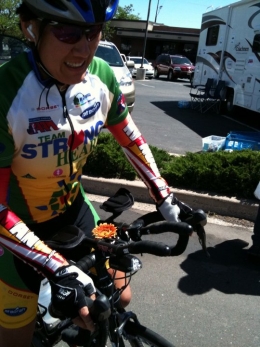 The hilly terrain of Arizona has proven to be a challenge for Amy and the other riders. One part of the course between the time stations at Cottonwood and Flagstaff is particularly difficult with an average elevation gain of 128 feet per mile.

After leaving Arizona, Amy crossed into Utah and passed the time stations at Mexican Hat and Montezuma Creek under more favorable conditions. Temperatures were in the 50s-60s and she had a chance to go downhill for awhile. Amy is headed for stops at Cortez and Durango, CO.

Amy stopped for the night in Durango, CO, a critical cutoff point, which Amy beat by 10 hours. Had she not arrived at the cutoff time, she would not have been allowed to continue the race. Steep climbs and cold weather are coming up for Amy. She still has to cross the highest point on the course at Wolf Creek Pass. After 3 days 5hours 38 minutes, Amy has traveled 857.68 mi at an average speed of 11.05 mph.

Amy passed the Pagosa Springs, CO time station where she faced the challenge of Wolf Creek Pass. As mentioned before, this is the highest point on the course with an elevation over 10,000 feet. The weather at this part of the course was also chilly as temperatures threatened to dip below freezing. 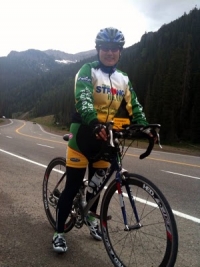 In spite of these challenges, Amy made it over the pass and through time stations at South Fork and Alamosa before stopping at La Veta for the day. After 4 days 14 hours 3 minutes, Amy has traveled 1,080.18 miles at an average speed of 9.82 mph.

After a tough day of climbing in Colorado, Amy proceeded through stops in Trinidad, Kim and Walsh, CO before crossing the state line into Kansas and making a stop at Ulysses. There she had a big breakfast and took a brief nap before continuing on. So far she has traveled 1,338.68 miles in 5 days 20 hours 26 minutes at an average speed of 9.53 mph.

Today, Amy faced some head winds as she continued east in southern Kansas. She made stops at the time stations in Montezuma, Greensburg and Pratt before stopping to rest. So far, she has traveled for 6 days 8 hours 43 minutes, covering 1,487.17 miles at an average speed of 9.74 mph.

Christopher Mohr is a freelance writer in the San Diego area and is a huge fan of the Padres, Chargers, Detroit Red Wings and Race Across America

They are my inspiration. pump fuel

Cycling - one of the best that we can imagine! Thanks for the article!