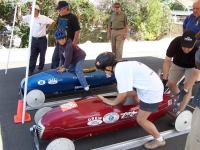 That’s been the attitude among many area youngsters as they prepared to compete in two days of Soap Box Derby Rally Races, with the final rounds today. The event is sponsored by Drew Ford and the Kiwanis Club of La Mesa. The race course is down Junior High Drive adjacent to La Mesa Middle School. Highwood Park is the staging area.

Last May, Bryce, age 11, of Santee, entered his first ever Soap Box Derby, emerging the winner in the stock car division at the annual local Drew Ford/Kiwanis Club of La Mesa Derby. His prize was to be sent to the National All-American Soap Box Derby Race in Akron, Ohio, in July, where, faced with hundreds of competitors in his division, he won several heats, climbing up the pairing ladder to finish fourth overall.

Derby Director Dennis Wilkes, a member of the La Mesa Kiwanis, said the club is very proud of Bryce’s achievement. In fact Bryce was honored at a club luncheon where he spoke about his experience and answered questions. “His trophy is almost as big as he is,” remarked Wilkes.

The La Mesa Kiwanis conducts two rally races each year, one in November and one in March. “These are opportunities for the drivers to get experience in steering and braking their cars,” Wilkes said. “The cars are built from kits. We hold car-building workshops at Drew Ford for the driver and their parents to assemble the cars together. All together, Soap Box Derby is a great family-oriented activity.”