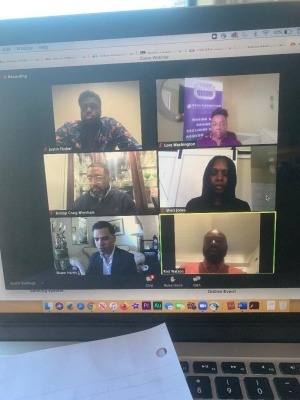 “When someone buys a home and they preserve that home and they stay in that home, what is the ultimate ownership?” asked Reverend Shane Harris of the People’s Alliance for Justice, who moderated and hosted the forum in collaboration with the San Diego Union Tribune.

Harris began by addressing issues of stagnation in black homeownership since 2016 as well of histories of red-lining, a tactic of systematic oppression and denial of opportunity which kept blacks and other minorities in certain neighborhoods, a move which made it difficult on the black community of today to utilize the generation wealth that the white community had the advantage of building.

“If you’re not given these opportunities to build generational wealth, then how can you build it?” asked Sheri Jones. Jones is a real estate broker who also holds a B.A. in Finance and worked as an accountant.

Jones discussed her own experiences of discrimination in the real estate community saying she had to over-sell herself at networking events for people to take her serious and was even bullied by white agents who didn’t realize she was a broker (and therefore superior to them from an industry hierarchy standpoint).

“I have to protect my clients and protect myself in the industry…I’m fighting for my right to be here,” said Jones.

The other panelists who are also black real estate agents agreed with Jones.

“We’ve seen the effects that redlining has caused across the country,” said Rod Watson.

Watson feels the need for state governments to make a type of reparations for black homeowners.

Watson says the overage home in California is $600 thousand.

“Most people don’t have the 20 percent to put down,” added Watson who believes that states should front the down payment in certain cases, even if it’s paid back over a period of time.

Watson cited a similar initiative in the U.K. in which the government gave millennials down-payment funds which a mild repayment plan to stimulate home ownership.

Washington said that a similar initiative to promote black homeownership is in the works and can be supported by elected officials.

There is already a program in effect for Native Americans, why not blacks too? Washington questioned.

“The black church has had a critical role in the organizing and economic structure of the community,” said Reverend Harris.

Bishop Worsham expanded on that saying that at his own congregation they hosted homeownership workshops and encouraged black homeowners to utilize a trust that would keep their homes in the family and prevent family members from selling the homes.

These trusts ensure that home remain in the family and that the family remains part of their community.

If the family members were not able to handle property management, Worsham had black property managers on site at the workshop who would be able to assist.

Washington reiterated advising the use of trusts to stipulate family members not to sell property in prime black communities.

“One of the things we believe in is data analysis,” said Reverend Harris.

“The most important thing is proper data,” said Worsham.

“Things are still the same as it was back then, 73 years ago,” said Washington, citing public policies that have worked against the black community.

The panel was not just focused on black homeownership but on the necessity of advising the buyer on how to keep and maintain their homes.

“It goes back to education,” said Justin Flisher, who has been a real-estate agent since her turned 21.

Flisher said he stays in touch with his clients and will continue to be aware of their needs.

“What happens after you hand the keys to the clients?” asked Fisher, “Are they going to be okay?”

Watson agrees with this approach and says the answer is to focus on income stability with potential clients/homeowners and on teaching about property taxes, homeowners insurance, and HOA costs, and any other long term costs that require a closer look into client make up.

Harris concluded the seminar by encouraging the public to support this and other initiatives of the People’s Alliance for Justice.