October 9, 2020 (San Diego) -- In a climate of uproar against national police brutality, the Racial Justice Coalition of San Diego County is demanding that police officers in our region are held accountable for ample shootings of unarmed individuals over the course of 25 years.

According to a review from the District Attorney’s Office, between 1993 and 2017 there were 451 police shootings of civilians, 55 percent of which were fatal.

According to this report, the DA’s office took on average 183 days to send a letter of review to law enforcement after these shootings (a letter was sent in only 432 of the cases).

In the larger preponderance of cases, the subjects were either black or Hispanic, and out of the total number of cases, forty percent involved a white officer shooting a non-white subject. 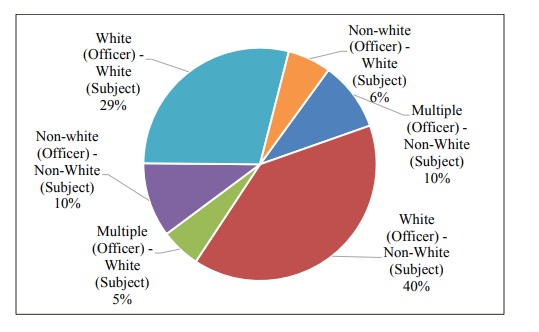 The most common incident preceding the officer-involved shooting was a traffic stop.

While the District Attorney’s office claims that “officer-involved shootings are the most thoroughly reviewed incidents in law enforcement,” members of the Racial Justice Coalition disagree.

Jonathan Coronel, Sergio Wick, Alfred Olango, Dennis Carolino, and Richard Price are just some of the local individuals whose lives were lost at the hands of police officers.

Some of the family members of these individuals are still seeking justice.

Many of these cases are also reflective of the issues of racial profiling and the lack of proper training of law enforcement when dealing with mental health issues.

Olango, for example, was an immigrant and former refugee from Uganda who was shot by law enforcement officials responding to an emergency call for psychiatric aid, after he pointed a vaping device at an officer.

The death of Earl McNeil, which was not a shooting, also devastated the National City community after McNeil died in police custody.  McNeil also suffered from a history of mental illness.

Although the DA’s office categorized McNeil’s death as a homicide, no law enforcement officers were charged accordingly.

The incident took place in 2017, but three years later there has been no success in re-evaluating McNeil’s death.

“The chief of the National City Police Department resigned…recently. That was all, nothing else. That was way after things had subsided he just out-of-the-blue resigned, so nothing happened,” said Buki Domingos.

Domingos is a local activist and home health hospice nurse who has been working throughout the COVID-19 pandemic and still maintaining her role with the Racial Justice Coalition, which she cofounded. Domingos is also a registered geriatric nurse in Germany, where she was raised.

Domingos originally hails from Nigeria and also considers herself German in nationality and culture.

Despite collective efforts, and the current climate of public protests seeking justice and police reform, the DA’s office has not followed suit in any attempt to provide justice for families in these cases.

“Right after we launched our campaign, the DA looked into four officer-involved shootings,” said Domingos. “She found that all the shootings were justified….

“She was pretty-much saying in other words that she didn’t believe in jury-trials [pertaining to these cases],” Domingos added.

“What really critical is the overall pattern and picture,” said Dr. Darwin Fishman. “When we launched the campaign, one of the main things we used to thrust for our campaign is an article that came out in the UT that was about a report [cited above] that came out in the DA’s office.”

Dr. Fishman is a professor of sociology, criminology, and African Studies at San Diego State University. He is also a cofounder of the Racial Justice Coalition and like Domingos, his activism extends to other community organizations focusing on justice in minority communities.

Fishman is originally from Davis, California and holds a Ph.D. in American Studies from the University of Maryland – College Park. Fishman is the author of Political Activities of African American Teenagers: A Case Study of High School Students in the Washington, D.C. Metropolitan Area (Edwin Mellen Press, 2011).

Both Fishman and Domingos attend various community coalition events on behalf of the Racial Justice Coalition, and represent a collective body of concerned voices from the San Diego community.

While the DA report delves into various details about the shootings, it makes no mention of prosecutions or follow-up investigations, nor does it discuss the results of the DA’s audit of the officers who were involved.

“They confirmed that no officer has been prosecuted in 25 years,” said Fishman.

“[Stephan] still has at least a couple years in that office and we would like her to prosecute those officers or resign and our main goal is to break that cycle of district attorneys in San Diego always siding with the shootings as justified regardless of how gruesome the murder or execution was,” said Domingos.

“The newest one – Richard Price – it was 40 bullets, and the question is how many bullets kill one person?” Domingos asked rhetorically.

The role of Summer Stephan

“The issue with Summer Stephan, why it’s so critical is she has been in that office for 28 years, she has worked through the ranks, most of the time as the only woman of Arab [Armenian] descent in that office…Before she became DA in 2018, she was deputy DA where whatever she said or did, did matter…so she’s been in a position of power for several years,” said Domingos.

Stephan was therefore present at the DA’s office for all of these cases involving police shootings.

“The thing is, is obviously from a community standpoint, you’re gonna have zero trust in a DA that has never prosecuted a police officer,” said Fishman.

Although this issue pre-date’s Stephan’s term, it does not pre-date her awareness or her ability to have made an impact.

For voters who have been directly impacted by police brutality and are working toward system reform, it is imperative to know which candidates are receiving funds from law enforcement groups.

“This is a cultural issue,” said Fishman, “just like the police have a culture of using force, the District Attorney has a culture of not prosecuting police officers.”

Sierra merely referenced a 2019 initiative that de-escalation training to law enforcement, a measure that many activists have dismissed as an ineffective token, while the majority of police budgets and training continue to focus on equipment and insurgency rather than de-escalation and fostering cross-cultural community understanding.

The training announcement (linked above) did acknowledge that 79 percent of the officer involved shootings over the 25-year analysis involved persons with drug and/or mental health issues; a concerning synopsis of the excessive use of force in these circumstances.