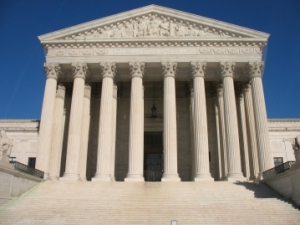 March 6, 2017 (Washington D.C.) – By a 5 to 3 vote, the Supreme Court has ruled that a verdict can be voided and a new trial ordered if a juror showed racial bias.

The case involved a Colorado racetrack employee convicted of sexual battery after a juror stated during deliberations that the defendant must be guilty because “he’s Mexican, and Mexican men take whatever they want.”

Other jurors revealed the remarks after the verdict was announced.

Justice Anthony Kennedy, the swing vote on the high court, joined with four liberal justices in the majority opinion.

He wrote, "Racial bias implicates unique historical, constitutional, and institutional concerns. An effort to address the most grave and serious statements of racial bias is not an effort to perfect the jury but to ensure that our legal system remains capable of coming ever closer to the promise of equal treatment under the law that is so central to a functioning democracy."

But Justice Samuel Alito wrote in a dissent joined by two other conservative justices that the ruling conflicts with state and federal rules protecting jury deliberations as confidential.

Alito wrote, "The court not only pries open the door; it rules that respecting the privacy of the jury room, as our legal system has done for centuries, violates the Constitution.”  He called that finding “startling.”

Justice Clarence Thomas, the court’s only African-American member, wrote a separate dissent in which he argued that ruling misrepresents the intent of the 6th and 14th Amendments. Thomas wrote, “In its attempt to stimulate a 'thoughtful, rational dialogue' on race relations, the court today ends the political process and imposes a uniform, national rule," he wrote. "The Constitution does not require such a rule. Neither should we."

Some justices raised concerns during oral arguments that the decision could open the door to overturning verdicts due to other forms of bias such as gender, religion, sexual orientation or political views.

But Kennedy contended that allowing nullification of a verdict once racial bias is found, even after a verdict, is necessary to prevent loss of public confidence in jury verdicts.

Just last month, the Supreme Court weighed in on another case involving racial discrimination.  By a 6 to 2 ruling, the justices found that a death row inmate in Texas deserved a new sentencing hearing after his own defense team presented testimony that was racially biased.