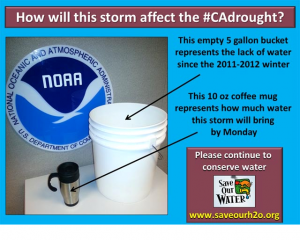 February 11, 2014 (Sacramento) – A storm over the weekend brought some rainfall to northern California, though any precipitation is welcome in the state’s extreme drought conditions .  The National Weather Service in Sacramento tweeted a photo to put things in perspective . It showed a five gallon bucket to represented the amount of water needed, with a 10-ounce coffee cup to represent how much rain has fallen.

Making matters worse, soils are so dry and hard from lack of rains that some of the recent rainfall has simply run off, instead of soaking in to replenish groundwater supplies.  Still, the rain brings some relief to drought stricken cities and farmers.

But a state Drought Monitor  report late last week indicated that 94% of the state is in drought conditions with 10% experiencing exceptional drought, the worst category.