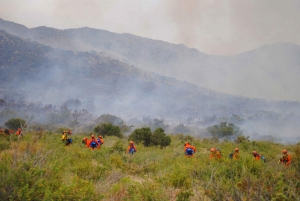 July 15, 2010 (San Diego's East County) - Rainfall aided firefighters in battling numerous fires in backcountry areas late today. Most were started by lightning strikes from thunderstorms.  The largest blaze in San Felipe along the Banner Grade near Julian had reached over 100 acres by early evening and is burning toward the desert.

Smaller fires were swiftly controlled in other communities including Warner Springs, Campo, and Lakeside.  Fast action by Lakeside resident Charley Barranco helped extinguish a brush fire in a  on the Levy water pump station at Lake Jennnings Park.

"On returning home from work to Choisser Lane in Lakeside I observed black smoke rising at the end of our street," Barranco told East County Magazine.  After spotting the fire, he recalled, "I grabbed a fire extinguisher out of my garage and drove to the East end of Choisser Lane, where I observed a brush fire burning in a weed filled drain culvert, starting to get close to some pepper trees."  Barranco said he told neighbors to call 911 while he bergan extinguishing the flames until firefighters arrived to finish the job.

Both Barranco and a Lakeside fire official have suggested that the Lakeside fire was not caused by lightning.  "I did see sevearl juveniles in the area when I arrived and suspect that they may have knowledge of the fire's origin," Barranco said.

A brush fire in Mission Valley burned six acres and caused evacuation of the La Quinta Inn, also slowing traffic on I-8 as onlookers watched the fire from the freeway.  A 3,700 fire that has burned for two days in Oceanside's Camp Pendleton is also now fully contained.

At El Capitan High School, practice continued on the football field despite rain and lightning strikes in the vicinity, sparking concerns for players' safety.

Sharmon Courmousis, owner of Sacred Rocks in Boulevard, was at her home on a canyon above the Mission Valley fire and was forced to evacuate.  "It was too close for comfort," she said.  "It burned UP the hillside and I went into the yard at the NW corner house and saw flames at least 60 feet high. Turned around and left, got my family together, and scooted out of there."

Courmousis expressed surprise at passersby who came into the firezone to watch.  "What make people think they will be safe?" she asked.  "Many died in the fires recently, and some even in the Normal Heights fire."

Across the County, the smell fo smoke permeated the air from multiple fires throughout the region.  Cal-Fire representative Roxanne Provaznik cautions readers to refrain from calling 911 if you merely smell smoke.

Thundershowers may continue through tomorrow, the National Weather Service Forecasts. In addition, a hazardous weather watch is in effect for desert areas due to excessive heat and humid monsoon-like conditions.