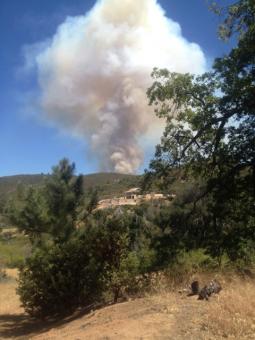 For Julian residents, the fire brought tense moments.  Rosemary Keane watched as the blaze encroached close to her new home under construction in Julian Estates (photos, left and below). 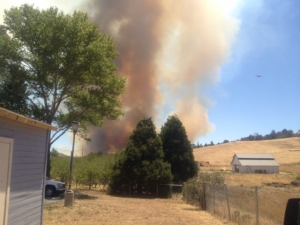 The online community forum proved a valuable resource to Julian residents eager for information during the fire.  Absentee residents got updates from those remaining in the area. At least one resident reportedly stayed in Kentwood, despite evacuations.

Marty Emery reported that Gavin Jones fought a spur of the fire threatening his home and Emery’s, risking his safety to help save homes.  “He lost a few trees and his whole property is orange from the air drop flame retardant!” Emery posted.

The community also pulled together to help those in need.  A donation jug was set up at Granny’s Kitchen restaurant to help John Raifsnider, who lost his home in the fire.

American Legion members planned to carry the jug in an Independence Day “freedom walk”   despite cancellation of the Julian parade down Main Street due to safety concerns. Cal Fire and the California Highway Patrol announced the closure to keep roads open for  firefighting equipment and if needed, more evacuations.

Fortunately, with help from Mother Nature, firefighters have gained control over the blaze and all evacuation orders have been lifted.