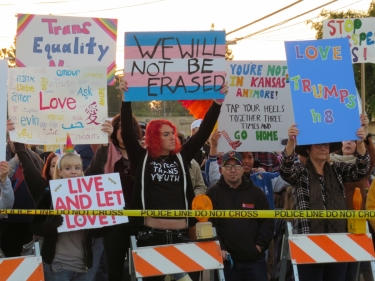 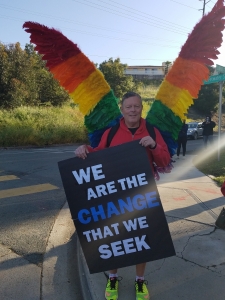 Robert Gehr and Miriam Raftery contributed to this report

Westboro is designated a hate group by the Southern Poverty Law Center and Anti-Defamation League. The cult-like organization is infamo 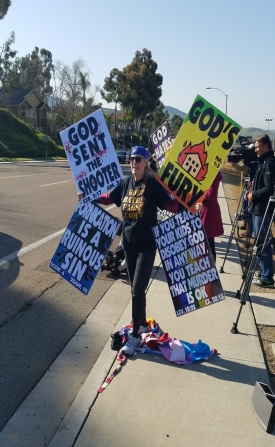 us for picketing funerals of gay soldiers and children killed in school massacres, among other venues, with vitriolic messages.

At the local protests, the Rainbow crowd standing against the WBC included Christians and Muslims, white and black, gay, lesbian, transgender and straight residents. They were separated from WBC by a strong presence of law enforcement officers, with local media at both locations. The half-hour protests at both schools went on without any reported incidents.

The WBC contingent was led by the daughter of the late Rev. Fred Phelps, Shirley Phelps-Roper, 61, along with her daughter, Rebekah Phelps-Roper, 30, a trained professional nurse and paralegal, and grandson, Luke, 16.

“We preach from the Bible to what we believe is true,” the younger Phelps-Roper said. “We’re happy that all of the people are protesting against us. They are completely being led by Satan. They all are going to go to burn in hell. Burn to a crisp.” 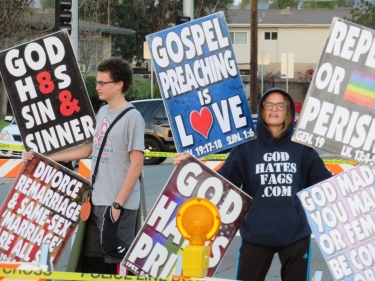 She expressed the opinion that being gay and Christian is a contradiction, referring to the visible Christians protesting at their picket. “You cannot call yourself a Christian and be gay. “They are Christians who are following an open and flagrant sin.”

East County’s veteran San Diego Union-Tribune reporter, Karen Pearlman, who is Jewish, was told by Rebekah Phelps-Roper during an interview, “You are going to hell.” She had no better words for Catholics and members of The Church of Jesus Christ of Latter-day Saints.

Phelps-Roper admitted to ECM that WBC’s use of the Baptist name is a misnomer. It has no affiliation with the American Baptist Churches USA and has been denounced by major Baptist organizations. WBC holds true to its own interpretation of Calvinist theology. WBC started in 1931 as a traditional Baptist congregation, but changed course in 1951 when Fred Phelps took over the congregation after being appointed earlier as Associate Pastor.

While the group has protested on behalf of its causes at high-profile events such as the Academy Awards and Super Bowl as well as soldiers’ funerals, the members did not have a stated agenda at Monday’s gathering, nor did they have a particular reason to protest at the two East County high schools.

“You can swing a cat and find all these high schools that are being taught to rebel against God. There are clubs and teachers, leaders that point them in the direction of disobedience against God instead of teaching them reading, writing and arithmetic,” Phelps-Roper said to local media covering the event. 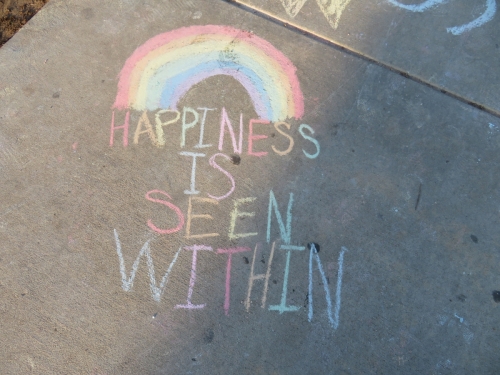 Photo, left: at El Cajon Valley, students created chalk paintings with messages of acceptance for all.

Meanwhile, protesters on the other side of the street under the banner of “The Westboro Dance Party Parade” displayed placards promoting love and tolerance. Former San Diego Sheriff candidate and retired commander Dave Meyers was at the protest wearing rainbow angel wings and a sign saying, “We are the change you seek.”

In El Cajon, the Rainbow protesters drowned out WBC chants by playing music by Queen, the rock group made famous by the late Freddie Mercury, who was bisexual.

Several East County politicians and community leaders including Mayor Bill Wells and Cajon Valley Union School District Trustee Jill Barto observed the protests. “It was important for me to make sure that the kids were protected during the protests,” said Barto. ECM observed students filing through a back entrance flanked by El Cajon Police Officers.

Yusef Miller, a member of the local Muslim community in Escondido, made the trip to El Cajon to show solidary with students. “I’m here to support the students. The Westboro Baptist Church – `church’ in quotes, are here to intimidate and insult the heart and core of these children. They shouldn’t have to go through that. We are not leaving them to these wolves who are attacking,” he said.

At the Monte Vista High School protest, the WBC trio was escorted to-and-from the sidewalk protest site by San Diego County Sheriff deputies from the nearby Spring Valley post office. The group, according to its own account, has picketed in all 50 states.

The Grossmont Union High School District and City of El Cajon were informed by WBO about the group’s intentions two weeks ago. Both the school district and the city coordinated efforts to protect and shield students from the protesters.

In an interview with San Diego CBS News 8 last week, Mayor Bill Wells said, “It’s really hard for me to balance what they are doing with Christianity,” said Wells. “Nothing I know about Christianity speaks to this at all.” 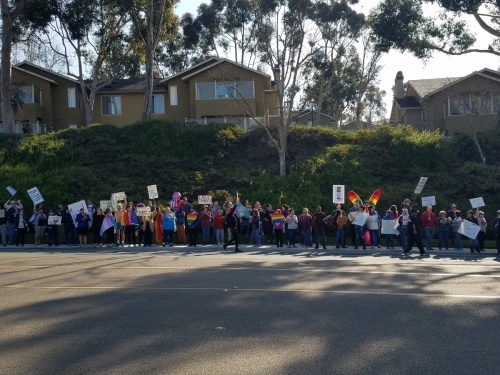 “I understand that people feel like they have to take a stand and if that’s what you want to do, then go ahead and do it,” said Wells. “From my point-of-view, as a psychologist, I would say don’t feed into the negative energy. Don’t give them what they’re asking for, which is a lot of negative attention,” he told CBS News 8 reporter Richard Allyn.

The Phelps-Ropers reportedly have plans to visit the San Diego Zoo this week.

Seems that 3 people making their 1st Amendment statements, were overwhelmed and drowned out. Seems that people didn't want to hear what they had to say. When I have something to say, I would like the courtesy and platform of civility without being called a bigot or drowned out. Fact is, one of the last comments on this editorial " “A lot of precious law enforcement resources were redirected to ensure safe passage to school" confused me, because I thought there were only three (3) picketers present. Could there have been unfair overkill and overreaction from over the rainbow? Were the Sheriffs defending rights of free speech?

Maybe you do.  Different strokes for different folks, I guess.  A little weird that that's your thing, but maybe I'm just a sheltered Catholic who deserves to be told to go to hell by you. *shrug* /deserved passive-aggressiveness