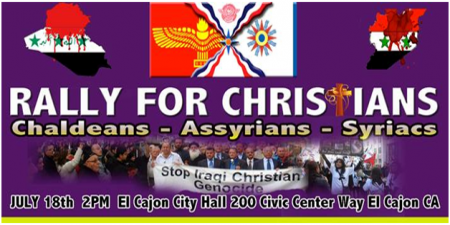 July 18, 2014 (El Cajon) – East County is home to an estimated 40,000 Iraqi Chaldean Christians as well as many Assyrians and Syriacs.

Local Iraqis including the Chaldean-American Chamber of Commerce, churches and other groups, ask the community to join them in a rally today, July 18 at El Cajon City Hall , 200 Civic Center Way, to urge protection and humanitarian help for those now fleeing Iraq, where a terrorist group has declared an Islamic caliph and is slaughtering Christians and other minorities.

A petition has also been launched calling on U.S. representatives to consider creating a safe haven for Assyrians and other minorities in the Nineveh Plains.

“A safe haven for the Christians is needed today more than ever,” Ben Kalasho, president of the East County Chaldean-American Chamber of Commerce and organizer of the rally, writes.

The recent attacks on Christians in Mosul, has led to a rapid exodus of Christians from the city to safer areas in the North of Iraq.  Over a thousand families—at least 4,000 people, have been escaped Mosul thus far, fleeing to safer areas in the north, according to Kalasho. He says, “The exodus of the Christians from Mosul has been carried out in a manner of panic and most families have not been able to take with them their personal belongings. The displaced families are moving into relatives' homes in the north part of Iraq and are being placed in some monasteries and churches. Let us all work hard to urge the free world to take immediate action and lasting measures to address this major humanitarian crisis suffered by the Christians of Iraq and Syria.”