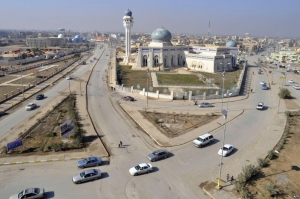 April 19, 2015 (San Diego)--The battle between Islamic State extremists, or ISIS, is intensifying in the Middle East. Here are the latest developments.

Thousands of Iraqis fled the city of Ramadi over the weekend as ISIS forces advanced, raining bombs on the city. Ramadi is considered at risk of falling to ISIS, the Washington Post reports.

Senator John McCain has criticized the Pentagon for downplaying the importance of Ramadi.

In the Kurdish city of Irbil, ISIS is being blamed for car bombings that killed three people.

Also in Iraq, an Iraqi provincial governor announced Friday that the highest ranking official from Saddam Hussein’s regime still at large is now believed to be dead, the New York Times reports.  A body believed to Izzat Ibrahim al-Douri will be DNA-tested to confirm the identity; however there have been several false reports of Douri’s death in the past.

A suicide bomber believed to be with ISIS set off a blast outside a bank in the Afghanistan city of Jalabad, killing 33 people and injuring over 100 on Saturday, according to Reuters news.

Thanks for sharing your story. A neighbor is a SEAL and my dad was a submariner in WW II. Dangerous work. Brave, highly trained and dedicated men.
I can't imagine the pain from losing your son.
Tom

The US fought a large battle for control of Ramadi from April 2006 to November 2006 for control of the capital of the Al Anbar Governorate in western Iraq. A combined force of U.S. Soldiers, U.S. Marines, U.S. Navy SEALs, and Iraqi Security Forces fought insurgents for control of key locations in Ramadi, Chris Kyle, who wrote American Sniper, because of his track record as a marksman during his deployment to Ramadi, was named Shaitan Ar-Ramadi (English: 'The Devil of Ramadi') by insurgents. (wiki) In regard to the recent ISIS offensive, Chairman of the Joint Chiefs of Staff Martin Dempsey reportedly recently described Ramadi as “not symbolic in any way.” This has led to an open letter, published on FoxNews, from Debbie Lee who wrote in part: "I am shaking and tears are flowing down my cheeks as I watch the news and listen to the insensitive, pain inflicting comments made by you in regards to the fall of Ramadi.. . .My son Marc Lee was the first Navy SEAL who sacrificed his life in Ramadi Iraq Aug 2, 2006."