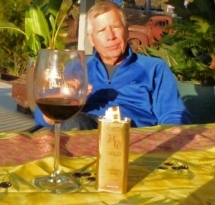 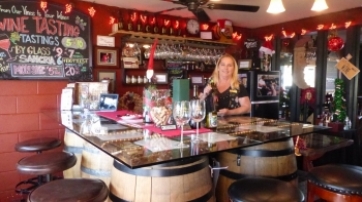 January 8, 2017 (Ramona) –“2016 is going to be our greatest vintage so far. Everybody says it came in perfect,” says Bill Schweitzer, cofounder of the Ramona Valley Vineyard Association (RVVA) in 2002,  and a driving force in attaining an American Viticulture Area (AVA) designation for Ramona back in 2006.  That’s due to the ideal combination of heat, rains and drought years—as well as years of efforts by local vintners now savoring the fruits of their labors.

Sipping wine on the sunny patio at Highland Valley Winery during the Holiday Wine Trail event in December, he reflected that back in 2001,  Ramona had just one winery (Schwaesdall) and 20 vineyards growing grapes.  Today, there are at least 29 wineries in Ramona, soon to be 35, and 150 vineyards. 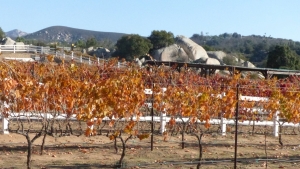 Historically, San Diego’s inland areas were the origins of wine-growing in California—starting with grapes to supply the San Diego mission.  Prohibition in the 1930s led farmers to rip out vineyards and plant other crops, such as water-hungry avocados.  But today, vineyards have made a comeback.  Ramona is now the hub of San Diego’s winemaking , attracting locals as well as visitors from outside the county.

“It is doing really well because climatic conditions are really good for growing wine grapes,” Schweitzer notes.   Like other fine winemaking regions of the world, Ramona has the combination of altitude and decomposed granite soils.  Hot days and cold nights mean acids survive until harvest time.  “That’s why we get great red wines,”  Schweitzer 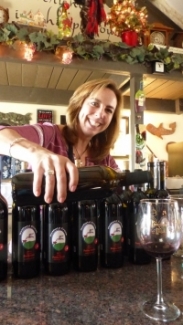 There are also pockets capable of producing certain white wines similar to those grown in France, Greece and Italy’s wine regions.  But the most popular white wine in the U.S., chardonnay, is not the Ramona region’s forte—and importing enough grapes to make it here isn’t allowed under county ordinances.   So local winemakers instead introduce wine-tasting visitors to vintages they may not be familiar with, such as Viognier.

After getting the coveted AVA designation in 2006, Ramona winemakers next fought to change a county ordinance that was still stuck in a Prohibition Era mindset.   They formed the RVVA in 2003 and soon, an AVA committee.   After learning consultants wanted $50,000, the vintners decided to  do the work themselves. So they did research to learn how other California areas allowed small winemakers to thrive without forcing them to pay a quarter million dollars in fees for major use permits.

In 2009, San Diego County passed a tiered winery ordinance spear-headed by Supervisor Dianne Jacob, but it was put on hold for several years due to lawsuits challenging the new law.  The County won its case in in 2013, the ordinance finally went into effect.

During that seven year gap, local vintners planted “a lot of vines” and bottled wines had ample time to age before they could be sold to the public. “ It was  a blessing in disguise.” 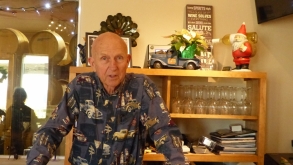 of wine was an important goal,  since wine lovers don’t want to drive miles only to visit just one tasting room.  The RVVA has worked hard to promote Ramona as a destination for winetasting—and has built a cooperative, not competitive, spirit among local winemakers and grape growers.

Richard McClellan (photo, left) owns Highland Valley Winery.  Long an amateur wine-maker, he moved here in 2005 from Sonoma County to bring together family scattered across the U.S., buying up a former horse farm where thoroughbred race horses for the Del Mar track had formerly been raised. 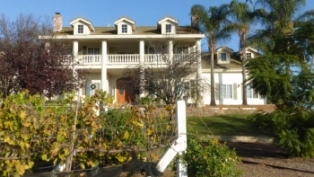 The property has a good well to supply water, ideal growing conditions for grapes –and an antebellum-style mansion for his extended family (photo, right).  Down came horse ranch fence posts, and up went vineyard trellises.  “I’ve pounded most of the nails,” says McClellan, who calls himself an “engineer experimenter.”

“I’ve got 12 to 14 varietals now. I’ve got a complete tasting menu of wines, all made with grapes we’ve grown here, and less than 1% from adjacent properties. We make all the wine,” he says, seated on the terrace outside his winery’s tasting room, where a generous array of cheeses, deli meats, fruits and nuts are offered up for guests on the Holiday 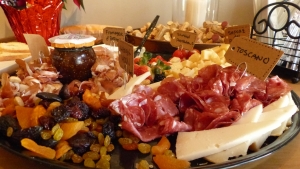 There have been good years, and then there were years when “it all went down the drain,” he says.

Some early pioneers in Ramona’s winemaking business  were skeptical at first about supporting upstart competitors.  “John Schwaesdall was somewhat lukewarm about getting more wines up here,” McClellan says.  “Now they’re the biggest fans.”

Schweitzer doesn’t make wine, but he grows grapes at Paccielo Vineyards (which means “{Piece of the Sky” in Highland Hills, an area where champagne grapes were once made for movie star Douglas Fairbanks.  A former computer expert in Silicon Valley, he also is a co-owner of Ramona Gold Olive Oil, one of several side industries that Ramona’s burgeoning wine business has fostered.  Four families cofounded it, including Scott and Donna Farquar, who traveled the world for the U.S. State Department and an entertainment company, tasting olive oil around the globe.

It takes years for most wineries to become viable economically.

“I’m making a profit, just out of my vineyard,” Schweitzer says. McClellan is still working toward profitability while reinvesting to plant more varietals.

“This wine tour is a good thing,” McClellan affirmed during the December event sponsored by the RVVA. “We had 50 people here yesterday. A lot of visitors are wine connoisseurs. You don’t have to go to Temecula—we have good wines right here.” 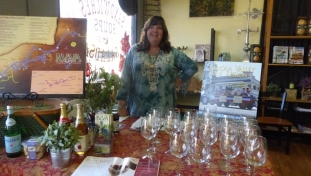 foresees Ramona growing to rival Pasa Robles –but never as commercialized as Napa.

McClelland quips, “Whether you want to hear their story or not, you’re going to.  We’ll be known for artisan wines,” he adds.

Each winery served up its own special style of welcoming guests. 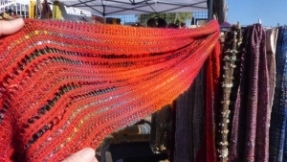 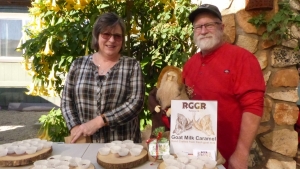 There were RGGR goat chocolate caramels (photo, left), Cheeses from the Cave and other delicacies to savor along with wonderful wines each named after constellations.  Owners Jacques and Susanne Sapier, a former attorney and teacher,  have drawn rave reviews on Yelp for their creations crafted by Susan, one of several women winemakers now in the region . Wines are served up on an outdoor patio and a cozy inside tasting room. 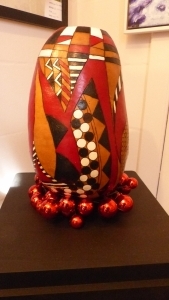 Pamo Valley Winery, the first woman-owned winery in San Diego County, has an urban tasting room on Ramona’s Main Street in a jewel-like setting, serving up rich reds such as a Sangiovese and an Estate Primativo.  There is also a gallery where you can enjoy paintings by local artists, hand-painted and carved gourds, and other handicrafts.  (Photo, right)

At Hacienda de las Rosas, each vintage is named after a Peruvian Paso horse, a breed raised at this working horse ranch.  The winery is built to resemble a  Spanish mission, and has some marvelous wines to savor.

La Finquita’s hilltop views can be savored along with wines or sangria.  Guests could do holiday shopping for items ranging from “Corkaments” to paintings by local artists. 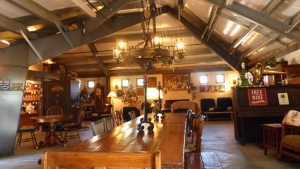 Hatfield Creek has a spacious indoor tasting room with long table to seat a crowd, with some delicious vintages to savor  (Zinfandel was my favorite) and a new porch-swing added outside.

Hellanback Winery is off the beaten track down a long and winding road—but worth the trip to hear the winemaker’s unique story on this ranch that survived both the Cedar and Witch Creek fires.  Plus who can resist trying a wine named Purgatory Pink? 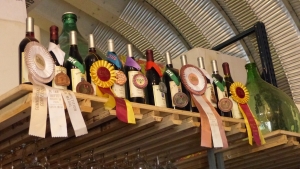 Principe di Tricase, founded by a descendant of an Italian prince, offered up some interesting fare included a rose-flavored dessert wine, awards displayed on a shelf above (photo, right), and outside, an aviary with peacocks and other birds.

Turtle Rock Ridge offered special discounts on tastings of food and wine for early birds, at the winery named for a distinctive rock formation resembling a turtle.

Woof 'n' Rose Winery, named for the owners' cherished dogs,  wasa among the first wineries in Ramona, started in 2007. Now they have a tasting room and have picked up multiple medals and awards for their wines.  Collectively over the past 5 years Woof’n Rose has taken more than 50 bronze, silver, gold, and double gold medals at the Finger Lakes International, San Francisco Chronicle, Florida State, and San Diego Toast of the Coast Wine competitions  They have also poured wine at many community events.

Lenora, the second oldest winery in the Ramona Valley, also participated in the tour and supports the RVVA to promote Ramona's wine growing region. 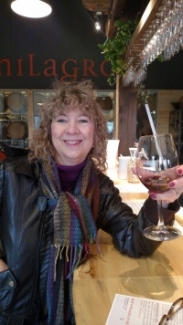 Ramona has come a long way in the past decade. When we first began covering the emerging wine business there,  we found only a couple of small tasting rooms—one operating out of a garage.  Today, you’ll find a diverse array of comfortable tasting rooms,  from cozy indoor rooms to outdoor terraces with beautiful views of the Ramona countryside.

But it doesn’t end here.  Visionaries at the RVVA are looking to the future.

McClellan says when visitors stop by Highland Hills Winery from Orange County and Los Angeles, “The first thing they ask are `Where can we get dinner’ and `Where can we stay?’ “

Winery owners for now are referring guests to outside lodging establishments. But some dream of more county ordinance changes to allow wineries to operate bed and breakfast inns or offer farm stays.

Fortunately,  for those who live in San Diego County, it’s a short and scenic drive to visit Ramona and savor the many new wineries springing up faster than wildflowers in green meadows after the winter rains.  There are several new restaurants that have recently opened in Ramona catering to wine tourists, too. Dining options include Marinade on Main (farm to table fresh cuisine),  The Main Course (fine dining), Ramona Family Naturals (sandwiches and healthy dining options), Lemon Grass Thai Food and Vegetarian, and the London Bakery (British tea room with scrumptious pastries). 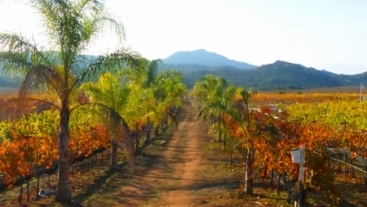 The entire town appears to be undergoing a Renaissance, including the HEART Mural Project which has adorned buildings throughout the historic western town with murals by local artists reflecting the community’s rich heritage.

Gazing out across vineyards resplendent in gold and red leaves in the late afternoon sunshine, juxtaposed between palm trees with the  rolling slopes of Ramona’s Highland Hills on the horizon, McClellan concludes, “People are coming here for a reason now, not just on their way to Julian.”

Lenora was not listed on a the list of wineries in the tour sent to media prior to the event. Perhaps it was a late addition?

If any other wineries were added late or omitted inadvertently off pre-tour publicity, please post your info in the comments section.

The article reports that Bill Schweitzer stated there was but one winery in Ramona in 2001. This is incorrect. Lenora Winery began its operations in 1999 and it is the second oldest winery in Ramona. While not acknowledged in this article, Lenora Winery was pleased to participate in the Holiday Wine Trail and supports RVVA activities to help achieve recognition of Ramona's fine wines and wineries.

that was also left off the pre-event publicity but was included on the tour.  I'm guessing these may have signed up to participate after the initial press release went out to media; in any case I've been to both of the wineries in the past (though not on the tour weekend) so I'm happy to add some info for our readers.